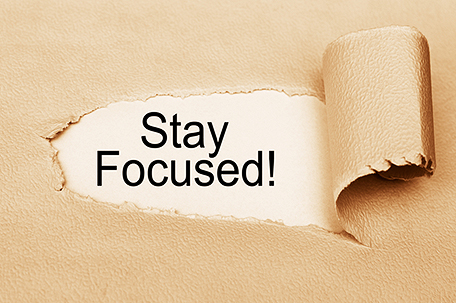 I figured the woman was in a hurry the way she was riding my bumper.

Earlier today, our youngest daughter Kaiah had an orthodontist appointment. As I was driving her to the office, I noticed the driver behind me was dangerously close.

Since I wasn’t in the passing lane, which was wide open, I wasn’t quite sure why she was following so closely, as if she wanted me to accelerate.

Initially, I considered speeding up. But then, I thought about it: I was obeying the speed limit and had no reason to rush.

After repeatedly glancing in my rearview mirror, trying to figure out what was going on, I got an idea: I would just keep looking straight ahead.

I realized ignoring her would be best, so I could concentrate on the road in front of me. Watching her was becoming a real distraction. I knew I couldn’t safely drive forward if I was constantly looking backward.

Besides, there was no way of knowing her reason for tailgating. Speculating was a waste of mental focus.

Once I shifted my attention, after a few minutes, I saw her car speed past on my left side. She had finally moved into the passing lane where she belonged.

As for me, I reached my destination on time and without incident.

You have to do the same thing.

On this road called life, there are always distractions and pressures coming from various directions. In order to remain on the right path, you have to ignore diversions, refuse to cave into pressure and keep your focus.

If you don’t, the enemy will run you off the road God paved for you. You’ll swerve off course and fail to arrive at your predestined place of purpose.

Your destiny is too important to give into distractions.

Have you noticed that each time you seek and pursue God’s will for your life, someone or something comes along to hinder, redirect and sidetrack you?

But don’t be deceived by the tactics of the enemy.

In Acts 16:16-18, when he and his team were doing evangelism work, a slave girl with a demonic spirit that allowed her to tell fortunes, kept following them around. She was known around town and made lots of money for her owners.

As she followed behind the group, she kept on shouting, “These men are servants of the Most High God, who are telling you the way to be saved.”

While what she was saying was indeed true, her motives were not pure. She was a distraction sent from Satan.

2 Corinthians 11:14 tells us Satan disguised himself as an angel of light. He is a chameleon and will take on whatever form he needs to in order to lure you away from the things of God.

In Acts, he used the diviner, who tried to inject herself into a genuine move of God under false pretenses.

Paul’s discernment, however, was too sharp for that. He got so fed up with her phony and loud displays of piety that he called out the very spirit behind the shenanigans.

The man of God said, “In the name of Jesus Christ I command you to come out of her!” And by the authority of Christ, Satan was expelled.

You have that same authority.

Expel Satan. Resist distractions. You have the power to push against whatever comes against your destiny.

Don’t get roped into anything that drives you away from the right path and takes you in the wrong direction.

To help you stay focused, I’m stirring Proverbs 4:25-27 NIV into your cup of inspiration, which says, “Let your eyes look straight ahead; fix your gaze directly before you. Give careful thought to the paths for your feet and be steadfast in all your ways. Do not turn to the right or the left; keep your foot from evil.”

As you drink down the contents of your cup, your focus is being renewed so that nothing will stand in the way of you reaching your divine destiny.

Whatever has come to hinder you is just a distraction.

It’s time to follow Paul’s example and command it to go in the name of Jesus Christ.

You are not here by accident

You’re blessed even when you’re under attack