Thank God in advance for your turnaround 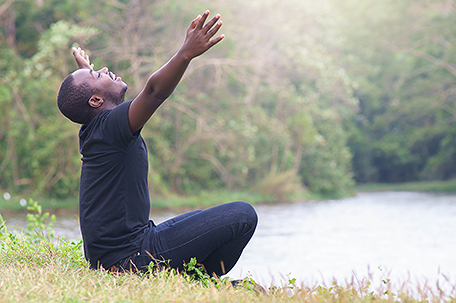 I was trying to type on a broken computer.

I had to rig the laptop in order for it not to black out. If the charger slipped out, immediately, the device would shut down because it couldn’t hold a charge.

It was so frustrating.

It was years ago, but I remember vividly how absolutely crazy it drove me.

I had bent the cord every way imaginable to keep it stabilized.

When I was able to successfully jerry-rig the thing, it worked beautifully. But when it malfunctioned, my efforts were a miserable failure.

I could not afford the repairs on the computer, but God told me to write.

Has the Lord ever given you a vision for which the provision had not yet manifested? If so, you can relate to my aggravation.

Some days, I would be sitting down, staring at a black screen, praying the computer would turn back on. I twisted, maneuvered, propped and slanted it every which way.

Why, I wondered, would the Lord give me an assignment with a broken down instrument? How in the world could I ever fulfill His will for my life without the tools I needed to accomplish the task before me?

On my most exasperated days, I questioned if I had even heard God. I flip-flopped a few times on my conviction. After all, in my mind, if He had truly called and anointed me, He would have also equipped me.

I mean, it would have been really great if He could have dropped a shiny new computer from the sky to help out His obedient writer. Without equipment, there was no way I could be equipped — at least that’s what I was thinking.

But you know what happened? The more I was challenged, the more innovative ideas came to me. I would find a way to do what the Lord had instructed me to do. With every breakdown and glitch, I became more resolute. That trying time built character in me. It made me more tenacious. It taught me how to do more with less. It helped me shed that quit-too-easily part of me and taught me to dig my heels in and stay the course.

Broke and all, I kept on.

I still have that broken laptop stored away. It is a reminder of how God was faithful to help me do His will through seasons of lack. I did not give up, even when I wanted to. Now I can look back and see how He stretched out His hand in my life and fulfilled His promises.

Back then, there appeared to be no way out. I felt stuck in that cycle of lack, struggle and frustration. But God already knew the plans He had for me. The same goes for you.

God’s promises are sure, though you may not be sure of when they will manifest. Whatever He said WILL happen.

I know it’s not easy while you wait. Failures, setbacks and troubles are difficult to deal with day after day. When you are believing God for a breakthrough and get a breakdown instead, it’s a real emotional let-down. When you are walking through a seemingly never-ending desert of drought and desolation, it is terribly difficult. Everything in you wants to see things flourish, move forward and blossom. When they don’t, your heart feels heavy and weighted down.

But trust me when I tell you, if you don’t throw in the towel, you will get to the other side. You will witness your turnaround. Those desert sands of lack lead to the seashore of abundance. Unfavorable circumstances have an ending point. No matter how tough it gets, this too shall pass. Things will work out for your good.

Expect a shift and thank God in advance for it.

Anticipate positive change in your life and believe that God is going to provide the answers you have been so desperately seeking. Condition your mind for your victorious outcome.

If the enemy is trying to discourage you because you don’t yet see what God has already said, know that you’re not alone. Every believer has been right where you are. We all know the difficulty of that waiting place.

The writer of Psalm 119 certainly did. While the author is unknown, though many have attributed the writing to David, I want to share verse 123 in the New Living Translation with you. It says, “My eyes strain to see your rescue, to see the truth of your promise fulfilled.”

The enemy wants you to abandon all hopes of triumph. He desires to see you give up on your faith and lose your expectancy of better days ahead. Your adversary will tell you that, because you have struggled for a long while, your release will never come.

The devil is a liar.

God is going to do everything He promised in your life. Just see to it that you don’t quit!

I’m reminded of a well-loved Bible story in 1 Kings 18 that I’ve shared here before. I feel led to give it to you again. The Lord told the Prophet Elijah He was going to send rain. This prophetic word came right in the middle of an awful drought.

In this passage, Elijah had fulfilled his divine assignment by presenting himself to King Ahab, an enemy of God. Elijah boldly defied and eliminated the prophets of Baal. But even after He obeyed, he saw no sign of showers. Yet, Elijah didn’t doubt that God’s promise to send rain was true.

Granted, the severity of the drought made it seem unlikely that a sudden downpour would come. And yet, Elijah told Ahab in verse 41, “…for there is a sound of abundance of rain.”

All Elijah heard was a sound. All he had was a word. But he saw no rain.

He responded in faith to what he heard, despite what he couldn’t see. Here’s what I want you to get: if you can learn to trust your ears, meaning, what you’ve heard from the Lord, instead of focusing on what you see with your eyes, you too, can respond in faith.

When Elijah went to the top of Mt. Carmel, he sent his servant to go and look toward the sea for a sign. The report from the servant was, “There is nothing.”

Have you ever been in the middle of a test, trusting the Lord to manifest the word you heard, but you still seeing nothing? I have. But as the saying goes, “When you’re down to nothing, God is up to something.” So Elijah told his servant to go back.

And the Bible says, on that seventh time, finally, the servant said he saw something. It was a little cloud about the size of a man’s hand. With that, Elijah told Ahab to get up and go, because he didn’t want him to get caught in the rain — the very rain that hadn’t manifested yet, mind you.

The word of the Lord says in verse 45 that the heavens got black. The wind began to blow and finally, “there was a great rain.”

God did it for Elijah. He will do it for you. This word is to reassure you that you will soon see what you heard.

As you drink down the contents of your cup, you will be encouraged to know that everything is going to be alright. God is turning some things around. Although you’re uncomfortable right now, brighter days are coming even sooner than you might think.

Hang in there. Victory is already yours. The manifestation of your divine release is on the way. “And let us not be weary in well doing: for in due season we shall reap, if we faint not.” (Galatians 6:9 KJV)

Thank God for your turnaround.

Prepare for a sooner-than-expected turnaround