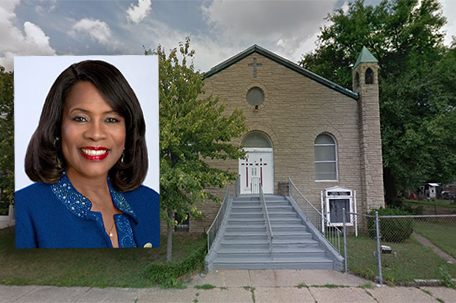 On Sunday, March 15, Dr. Glenda Baskin Glover, president of Tennessee State University in Nashville, will be the guest speaker at the 11:00 a.m. service.   This will be the culminating event marking the 19th pastoral anniversary of Reverend Dr. Tony C. Evans, Sr. and First Lady Nannette Evans, at the historic Tenth Street Baptist Church in Camden, New Jersey.  This year’s theme is, “God Is Not Through with Me Yet!”

Dr. Glover is a member of several professional, civic, and non-profit organizations. She is also the recipient of numerous awards and honors, and recently received the prestigious Thurgood Marshall College Fund Education Leadership Award as the 2018 HBCU President of the Year. Glover was also named to Essence Magazine’s 2019 “Woke 100” List of influential African American women change agents and power players that also included First Lady Michelle Obama, and Gayle King of the CBS This Morning News. In 2013, she was named to Diverse Issues in Higher Education’s prestigious list as one of the “Top 25 Women in Higher Education.” Dr. Glover also serves as the international president of Alpha Kappa Alpha Sorority, Incorporated.

The Rev. Dr. Tony C. Evans, Sr., has the distinction of serving as the 11th pastor of the Historic Tenth Street Baptist Church, which was founded in 1888.  Under his stewardship at Tenth Street Baptist Church various community partnerships were formed to meet the need of the congregation and the community as a whole.  These outreach ministries would include: St. Jude’s Hospital, The Clark Family Breast Cancer Services, food pantry and nutrition education with the KROC Center; financial literacy and affordable housing seminars, children’s literacy initiative with the Philadelphia Eagles, monthly services at the Abigail House Convalescent Home just to name a few.

Evans is a native of Chicago, Illinois. He is an esteemed graduate of Tennessee State University, Nashville, TN where he served as Head Drum Major for the nationally renowned TSU Aristocrat of Marching Bands.  He received his Bachelor of Science Degree in Architectural Engineering, with a minor in Civil Engineering.  He holds a Master of Arts Degree in Chaplaincy and a Ph.D in Theology. Evans has been an integral part of the community serving in municipal government as a mentor in Chaplaincy Program for the New Jersey Department of Corrections. He is the immediate past  National Chaplain for Kappa Alpha Psi Fraternity Inc.. He has been  married to his childhood sweetheart, Nannette Evans, for 42 years, and is the father of three children: Samiya, Tony Jr., and Ryan and grandfather to five.