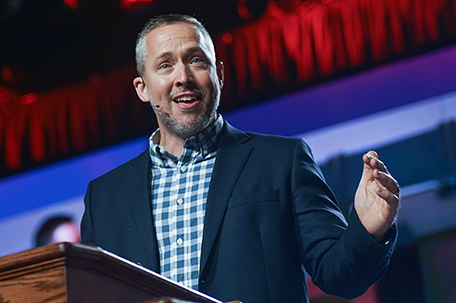 At the conclusion of the largest Protestant denomination’s annual meeting, held June 11-12 in Birmingham, Alabama, messengers — the delegates selected from SBC member churches to attend the meeting — had cast their votes in favor of amendments to the SBC’s constitution to state that discrimination based on ethnicity and instances of sexual abuse would put a church’s membership in peril, deeming it to be “not in friendly cooperation” with the convention.

Messengers also voted to amend the SBC’s bylaws to give the SBC’s credentials committee the power to investigate complaints against churches in instances of sexual abuse or racism and make recommendations for action.

During the meeting, Southern Baptists received an update on the sexual abuse advisory study that Southern Baptist Convention President J.D. Greear launched last year, soon after he was elected.

After the votes, Ronnie Floyd, president of the SBC’s executive committee, told messengers, “I believe this is a very significant moment in the history of the Southern Baptist Convention. And I believe that every one of us needs to thank God for this moment,” the Baptist Press reported.

“May this world know that the Southern Baptist Convention stands against all forms of sexual abuse,” Floyd said. “May this world know that this convention of churches — 47,000 churches, plus a few thousand congregations, just under 52,000 churches and congregations — has given a clear signal not only about what we believe about sexual abuse, but we also stand against all ethnic discrimination in the United States and around the world.”

After his election last year, Greear made it a priority to appoint a diverse group of people to Southern Baptist committees. Of the 126 appointments he has made in the last year, nearly half were people of color and 38% were women. They worked at this year’s annual meeting.

“I have a lot of appointment power as president,” Greear said. “We’re one of the most diverse (groups) in the nations, if you look just at our numbers.”

“Our leadership doesn’t yet reflect that diversity,” Greear said. “One of my agendas has been to say, ‘We don’t come together because we all grew up in the same neighborhoods and look the same and vote the same.’ We need leadership that reflects the diversity that God has given us in our convention.”

The Southern Baptist Convention, a fellowship of more than 47,000 Baptist churches and 15 million members across the United States and its territories, is the country’s second-largest faith group after the Catholic Church.