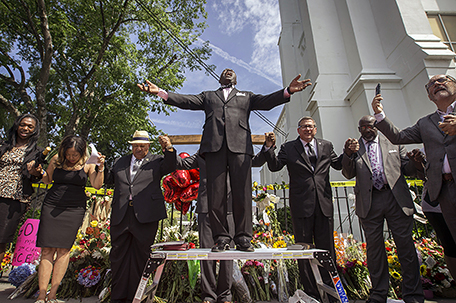 ABOVE PHOTO:  Dr. Dexter Easley preaches to a crowd gathered outside the Emanuel AME Church during a prayer service by the National Clergy Council, Saturday, June 20, 2015 in Charleston, S.C. Clergy from around the country led prayers and words of hope to the people in attendance.  (AP Photo/Stephen B. Morton)

CHARLESTON, S.C. — The congregation at Emanuel African Methodist Episcopal swayed and sang, prayed and welcomed the world into their sanctuary last Sunday, holding the first worship service since a white gunman was accused of opening fire during a Bible study, killing nine black church members.

Messages of love, recovery and healing were interspersed throughout the service, which no doubt reverberated throughout churches across the country. There was enthusiastic singing and shouting, so much so that many waved small fans in front of their faces. Bottled water was handed out. Uniformed police officers flanked the congregation as a measure of added security, and worshippers’ cried as they prayed at the church known as “Mother Emanuel” because it is one of the oldest black congregations in the South.

“It has been tough, it’s been rough, some of us have been downright angry, but through it all God has sustained us and has encouraged us. Let us not grow weary in well-doing,” said the Rev. Norvel Goff, a presiding elder of the 7th District AME Church in South Carolina.

Goff was appointed to lead the historic Charleston church after Emanuel’s senior pastor, the Rev. Clementa Pinckney, was shot and killed. Pinckney was also a state senator and married father of two children.

“The blood of the ‘Mother Emmanuel 9’ requires us to work until not only justice in this case, but for those who are still living in the margin of life those who are less fortunate than ourselves, that we stay on the battlefield until there is no more fight to be fought. And for that we say, `Thank you,’” he said.

Sunday morning marked the first service at Emanuel since Dylann Roof, 21, sat among a Bible study group and opened fire after saying that he targeted them because they were black, authorities said.

Events to show solidarity were planned throughout the city and beyond. At 10 a.m. EDT, church bells rang throughout downtown in this “Holy City” – which garnered the nickname because of the numerous churches here.

Later Sunday, people gathered on the Arthur Ravenel Bridge to join hands in solidarity. The bridge’s namesake is a former state lawmaker and a vocal Confederate flag supporter.

Roof had been photographed with the flag several times before the shooting.

South Carolina Gov. Nikki Haley and Mayor Joseph Riley attended the service at Emanuel. With the church packed, people gathered outside in the blistering heat.

Despite the grim circumstances the congregation has been faced with, the welcoming spirit Roof exploited before the shooting is still alive, church members said.

Goff said reopening the doors of Emanuel so soon after the shooting “sends a message to every demon in hell and on Earth.”

For the family of Cynthia Hurd, Sunday’s service was especially poignant. Hurd, a longtime librarian, would have been celebrating her 55th birthday and was planning a trip to Virginia with her siblings.