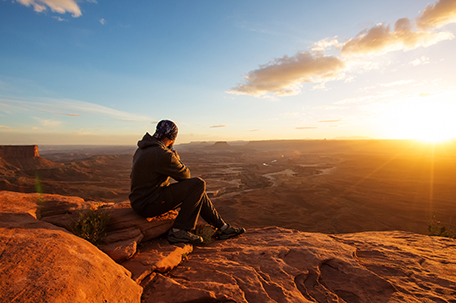 I stood in the middle of the floor with my hands on my hips, shaking my head.

“Where in the world is it?” I mumbled, surveying the room, pensive and a bit peeved. I was searching for my main laptop — the one I had just used before heading to church to teach weekly Wednesday Bible study last evening.

There weren’t too many places it could be, so I was thoroughly confused when after looking in my “go-to” spots, I came up empty.

Finally, after going around in circles, I decided to call for help. I asked Kyla and Kaiah — our teen daughters — if they could assist me in my search. They happily obliged. The upbeat and chipper pair came bopping into the room one after the other, listening as I explained my dilemma of not being able to locate my portable computer.

Right away our daughters joined my mission to find the missing device.

Less than a minute later, Kaiah, our 15-year-old asked, “You mean this laptop?”

I looked down at the device she was resting her left hand on and locked eyes with her before bursting into laughter. “Seriously?” I replied, giggling, though I wasn’t actually shocked about how quickly her search yielded results, despite my own extended one being fruitless.

You see, over the years, I’ve learned that I often have trouble seeing things that are right under my nose. I’m not sure why or what prohibits me from seeing the obvious, but I do know one thing: my exploration skills are seriously lacking.

Knowing such a thing about myself helps me more readily ask for assistance so I avoid spinning my wheels in vain. I wonder how much better off we would all be if we applied this way of thinking to problems we encounter along our spiritual road to divine destiny.

As I was meditating on this today, I examined it in light of a powerful Bible story found in 2 Kings 6:8-22. This passage of scripture gives us insight into the mentality of someone who was struggling to see also.

Their struggle was far more complicated than mine.

This historical account I’m referencing is set in the time of King Aram, ruler over Syria, who was waging war against Israel. Every time he tried to ambush the Israelites, who were God’s chosen people, the Lord would reveal Aram’s plans to the prophet Elisha. The prophet would then tell the king of Israel what was in the works.

Elisha was a seer. Unlike those walking around spiritually blind, this man of God was divinely empowered to see beyond what was immediately apparent to the natural eye. He got his war intelligence from up above, which made this prophetic informant with anointing from on high a great asset.

Elisha helped Israel continually dodge the attacks of the Syrians and avoid traps. It was a phenomenal and effective war strategy for them while it dealt a serious blow to Aram.

The Bible says the Syrian monarch got paranoid and thought surely I have a traitor inside my kingdom leaking secrets. Little did he know, there was a Savior with an opposing Kingdom, revealing what was hidden for the benefit of His beloved and chosen followers.

Well, eventually, the truth came out and Aram, whose name in Hebrew means “exalted,” learned that Elisha the prophet was the one responsible for thwarting his plans. So, he set out to shut down this trouble-making revealer of secrets.

He didn’t realize that his exalted — but manmade — throne was no match for the true Exalted One, who is high and lifted up, according to Psalm 57:15, and has all power over both heaven and earth. Though Aram was a person of influence that commanded a great army, his military strength could not stand up to the forces of Heaven’s angelic host.

Not knowing that his defeat was imminent, Aram sent horses and chariots under the cover of night to surround Dothan, the place where Elisha was staying. The next morning, when Elisha’s servant saw that they were surrounded, it appeared to be a perfectly executed ambush.

In verse 15, the servant panicked, ran back to Elisha and blurted, “Alas, my master! What shall we do?”

This servant must have been thinking, Elisha doesn’t know what I was just looking at out there. We are about to die!

But there was something the servant failed to see: God’s introduction into the equation. The servant didn’t recognize that his math was off. He thought he and Elisha were outnumbered. Boy, oh boy, how wrong he was!

In verse 17 the word of God says Elisha prayed, ‘Open his eyes, Lord, so that he may see.’ Then the Lord opened the servant’s eyes, and he looked and saw the hills full of horses and chariots of fire all around Elisha.”

The Arameans were the ones who were outnumbered.

Elisha knew. That’s why he didn’t get rattled. When he spoke to God, he didn’t inquire about whether or not the host of Arameans would indeed overtake and capture him. Elisha was confident. And this confidence stemmed from the supernatural ability he possessed to see what was going on in the unseen realm.

I love it that in Elisha’s prayer, that word see is the Hebrew word raah (raw-aw’). In some texts, it just means natural eyesight. But here, it deals with prophetic sight into the spiritual realm. It means miraculous vision.

So then, Elisha prayed that God would give his servant supernatural vision to see beyond the present circumstances controlling the seen realm and into the realm of the unseen which clearly revealed that God was in the midst of them.

And God did it. He answered Elisha and shifted the servant’s perspective.

Before the miracle happened though, with his natural sight, the fearful servant saw only that he and Elisha were surrounded by a host of enemies. But with his raah — miraculous vision — he saw a much bigger host of divine allies encamped around them!

Friend, when God shifts your perspective, you see bigger, believe bigger, and expect bigger. No matter what things look like on the outside, the assurance you have on the inside will give you peace in confusion, joy in sorrow, and hope in a hopeless situation.

That’s why I’m praying for you right now that God will open your spiritual eyes to see the work of the Lord. I believe He will honor my request.

As He opens them, you will see that God is already moving. His favor is all over you. He’s changing your situation for the better. His power is altering the course of your destiny. His protection is yours; all you need, He has already supplied.

If you can grab hold to this truth today, and instead of panicking, you’ll praise. Instead of worrying, you’ll worship. Instead of being fear-filled, you’ll be faith-filled. Rather than expecting defeat, you’ll rejoice over your victory.

Through this cup of inspiration that God Himself ordained for you to read at the present moment, He is giving you a deeper revelation of who He is and how He’s working in your life. He’s pushing and empowering you to see beyond your natural eyesight and move into a new realm of spiritual insight.

No longer will you do what Elisha’s servant did and go into panic mode when opposition arises. When you see “Aram” come against you, which for our purposes figuratively represents intimidating trouble of some kind, you won’t exalt the problem above God’s power. Your divine insight, your “raah,” will look beyond problems, issues and obstacles and see blessings, favor and breakthrough.

If you have been discouraged lately due to your circumstances looking so bleak, that’s about to change. Your blinders are coming off today by faith! Your bigger, better, greater vision will empower you to do, be and have more, according to the power of God working in you.

I decree and declare that your perspective has shifted because you are doing what Psalm 121 says, which is what I’m stirring into your cup of inspiration in the NIV version. That verse says, “I lift up my eyes to the mountains — where does my help come from? My help comes from the Lord, the Maker of heaven and earth.”

As you drink down the contents of your cup, your focus will change. You will stop fixating on your mountain of problems and begin focusing on the Problem-solver who sits atop that mountain.

He rules. He’s in control. He’s sovereign. He has a good plan for your life. He is ensuring that no weapon formed against you will prosper!

Can you see it?