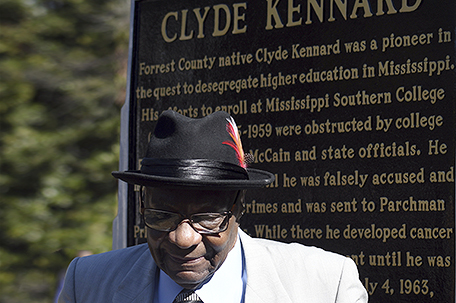 ABOVE PHOTO: Willie Grant, brother-in-law of Clyde Kennard, stands in front of the new marker outside of Kenard-Washington Hall at Southern Miss in Hattiesburg, Miss., on Friday, Feb. 2, 2018. Kennard tried to become the first black student at Southern Miss in the 1950s. (Susan Broadbridge/Hattiesburg American via AP)

HATTIESBURG, Miss. — A highway section near the University of Southern Mississippi has been named to honor a civil rights pioneer who was wrongfully convicted after he tried to enroll at the all-white university in the 1950s.

The Hattiesburg American reported that a ceremony was held Thursday to name a section of U.S. Highway 49 in honor of Clyde Kennard, the first Black student to apply for admission to the university. Kennard, an Army veteran, was denied admission when he applied in 1955 and again in 1959. Legislators voted to name the segment of highway for Kennard during the 2021 legislative session. Kennard was convicted of purchasing $25 worth of chicken feed he knew to be stolen in 1960 and sentenced to seven years in prison. Posthumous investigations into Kennard’s case showed the charges against Kennard were fabricated, and the only witness against him has recanted his testimony. A judge in 2006 threw out the conviction. Kennard died in 1963, after being released from prison early because he had intestinal cancer.

Dennis Dahmer, son of slain civil rights leader Vernon Dahmer, said stories like Kennard’s need to be told so younger people can be inspired by the generations who have gone before them, the newspaper reported.

“It is a horrific story of how the Mississippi justice system was used to thwart the integration of USM and lead directly to Clyde’s untimely death,” Dahmer said.

Hattiesburg Mayor Toby Barker said the marker will flank the very campus where Kennard was denied the opportunity to continue his education. “As I was getting ready this morning, a word that came to mind was redemption. . Redemption acknowledges the wrong and the collective failure of humanity,” he said.

“Redemption doesn’t undo the injustice, but it can repent for it. It can work to correct it. It can bend that arc of the moral universe. As Theodore Parker and Martin Luther King Jr. said, ‘a little more toward justice.”’