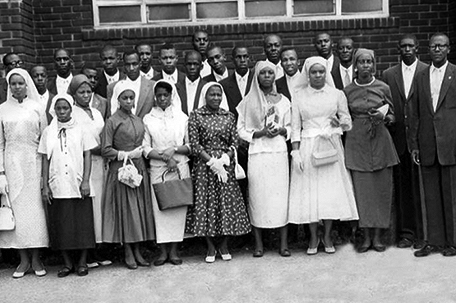 Told through the eyes of Muslim community members, Muslim Voices offers rare and vital perspectives on the significance, vibrancy, and diversity of Muslim populations in Philadelphia. These stories are not only integral to the history of Philadelphia, but offer a powerful contribution to contemporary conversations on Islam in America.

The presence of major figures like Malcolm X (El-Hajj Malik El-Shabazz), movements such as Ahmadiyya and the Moorish Science Temple, and the immigration of Muslim populations from around the world make Philadelphia an important historic center for Islam in America. Muslim Voices offers a glimpse into this dynamic history, particularly highlighting stories and voices of Philadelphia’s large African-American Muslim communities.

As part of Muslim Voices, participating religious and cultural organizations collaborated with local media arts producers and scholars, exploring how best to tell their stories, define themselves, and portray complex cultural experiences and histories. The collaborative media pieces focus on diverse topics, including key organizational and institutional histories, immigration, conversion stories, and the experience of women in Islam. For example, Masjid Freehaven documents and contextualizes their history in Lawnside, NJ, an important site on the Underground Railroad. Members of the Bawa Muhaiyaddeen Fellowship and Mosque explore the inspiration of the first community-built Sufi Mosque in Pennsylvania. And the Qu’aid Ameer Abdul-Majeed Staten Hajj Foundation (QAAMS), whose main objective is to send young people on Hajj, chronicles the lives and journeys of its members.