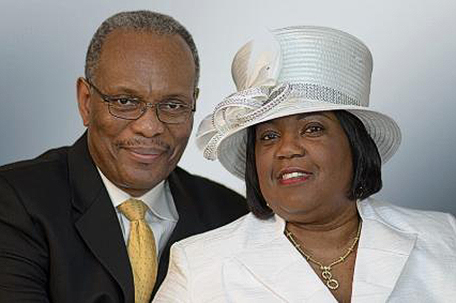 Former Philadelphia Eagles running back, the Rev. Dr. Herbert Lusk, Sr., pastor of Greater Exodus Baptist Church in North Philadelphia — one of the leading churches in the City — will preach at the 12th Pastoral Anniversary of Mt. Pleasant Baptist Church in Twin Oaks, Pennsylvania on Sunday, May 19, 2019 during the 10:45 am worship service.

Lusk and Mt. Pleasant’s pastor, the Rev. Dr. Willie E. Robinson, have been friends for decades,  a friendship that began not long after Lusk left the NFL at the height of his playing career to enter the ministry full time.

“Rev. Lusk and Pastor Robinson go way back,” said Ted West, head of Mt. Pleasant’s deacon board. “Rev. Lusk even changed his schedule just so he could come and speak for Pastor’s 12th anniversary.”

Pastor Robinson and his wife, Michelle, have been at Mt. Pleasant since 2007. Under Pastor Robinson’s leadership, Mt. Pleasant has expanded following a multi-million-dollar capital campaign that helped the church re-position itself in the community and beyond, as the church has attracted online viewers from around the world.

“We are blessed to have him as our pastor,” said West. “He’s very compassionate, personable, honest, straight-forward and really focused on helping people become better Christians.”

Robinson received a B.A. degree in Religion in 1987 from the Virginia Seminary and College Extension School. In May 1993, he received a M.Div. degree; and in 2006, he received his D. Min. at the Eastern Baptist Theological Seminary.

Dr. Robinson met Lusk when he was pastor of the Mt. Zion Baptist Church in Philadelphia, PA. They have been close friends ever since. Lusk was licensed to preach in 1980, three years after he surprised the nation by praying in the end zone after running for a touchdown, reportedly the first NFL player to ever do so.

He was ordained in 1983. Lusk holds a B.S. in Psychology and Sociology, a Master of Divinity degree, and three honorary doctorate degrees.

The public is invited to attend the anniversary service at 10:45 am at 101 Washington Avenue on Sunday, May 19.