Reparations are for descendants of Black slaves, Weber says 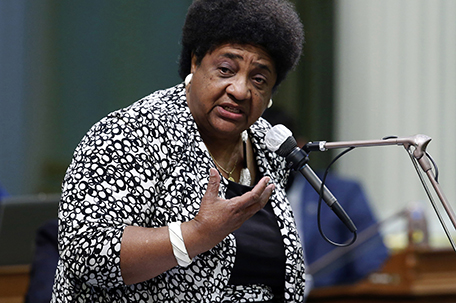 ABOVE PHOTO: Assemblywoman Shirley Weber speaks at the Capitol in Sacramento, Calif. California’s secretary of state says reparations for African Americans should be limited to the descendants of slaves. Weber is the daughter of sharecroppers who authored legislation creating the first-in-the-nation task force in California to study and recommend reparations. (AP Photo/Rich Pedroncelli, File)

SACRAMENTO, Calif. — California’s secretary of state said last Thursday that reparations for African Americans should be limited to people whose forebears were kidnapped from their homeland, stripped of their ancestry, and left with nothing after generations of forced labor.

Shirley Weber, the daughter, and granddaughter of sharecroppers who authored legislation creating the first-in-the-nation task force to study reparations, said while Black immigrants have suffered from racism in the U.S., they always had a country to return to. Slavery was more than a physical condition, she said, and its psychological impact stunted people’s ability to strive beyond survival.

“The fear my grandfather felt, I remember as a child, was palpable, and it crippled him and his family’s ability to dream beyond the cotton fields,” Weber said at last Thursday’s meeting of the task force to study and develop reparations for African Americans. The meeting continued on Friday.

She said that Barack Obama likely never would have dreamed of becoming president had he descended from enslaved people. Obama, the country’s first Black president, had a white mother and a Black father from Kenya who came to the U.S. to study. Obama, she said, “did not have limitations and fears drilled in his psyche, and thus aspired to become the president of the United States.”

The nine-member task force, which started meeting in July, is on a two-year timeline to address the harms of slavery, especially given inaction at the federal level. Critics have said that California did not have slaves as in other states and that it shouldn’t have to address the issue or pay for it.

But expert testimony being heard by the task force overwhelmingly points to large racial disparities in wealth, health, and education in California. African Americans make up just 6% of California’s population yet were 30% of an estimated 250,000 people experiencing homelessness who sought help in 2020. Their communities have been razed in the name of redevelopment and Black people remain over-represented in jails.

In September, Gov. Gavin Newsom signed legislation returning prime beachfront property to descendants of a Black couple who had the land taken away by eminent domain. Weber’s great-grandfather was born into slavery and her family fled Arkansas in summer 1951, running from the Ku Klux Klan in the dead of night, she said.

She said she would not have written the legislation if she had known the pool of recipients would be expanded, leaving mere pennies for the descendants of slaves.