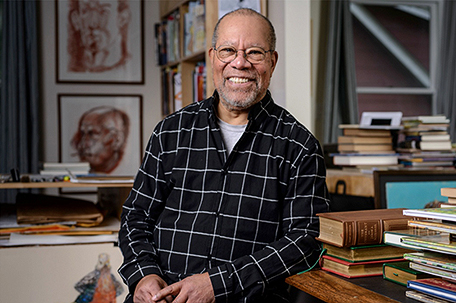 We were very saddened to hear about Jerry Pinkney’s sudden passing last week at the age of 81.

He was a Philadelphian by birth and spoke at the Free Library numerous times to share his beautiful books and art. So much so. that on July 19, 2016, Mayor Jim Kenney declared it to be Jerry Pinkney Day.

As a storyteller and artist, Pinkney added so much joy and beauty to the world. His illustrations, created in layered watercolors — at times with a light pencil sketch showing underneath — are full of light, warmth, and vibrancy. His books will continue to delight and inform readers for years to come and will remain an important and unforgettable part of children’s literature.

Pinkney offered this statement about his life’s work:

“A sense of community has always been important to me, and I want that to be reflected in my art. When I speak of community, I am not only talking about the immediate world around me, but also legacy. I am always searching for projects that connect with my culture and the experience of being Black in America.

I love the act of making marks on paper, and seeing those marks develop into a picture. How rewarding it is to just sit, observe, and paint! But I am a storyteller at heart, which is why I was drawn to picture books. Each project begins with the question, “Is this story worth telling? Is the manuscript an interesting read? Is it surprising and challenging? Will I, in the process of making pictures, learn something new?” With these questions answered, I let the text speak to me. The style in which a story is written will offer me clues and give direction.

When I am working for children, I aim for clarity with a direct correlation between text and art, but I still illustrate stories not as I imagine a child sees them, but how I see them. My work is my life’s vocation, yet it is also the way I get to speak about interests and passions, the immediacy of drawing and my love of painting. What drives my narratives is the search for order, symmetry, beauty, and emotion. I want to lead the viewer into my imagination—a world that exists inside these pictures. I have illustrated over a hundred children’s books, and my wish for each one is that all ages will be able to find something that touches them in some way.”

A native of Philadelphia, Pinkney studied at the Philadelphia College of Art (now the University of the Arts) where, in 1992, he received the Alumni Award. He has been illustrating children’s books since 1964, illustrating over one hundred titles. His books have been translated into sixteen languages and published in fourteen countries, and he has been the recipient of a Caldecott Medal, five Caldecott Honors, and five New York Times “Best Illustrated Books.” He has received five Coretta Scott King Awards, and four Coretta Scott King Honor Awards.

Pinkney was also a United States nominee for the l997 Hans Christian Andersen Illustration Medal, recognizing those whose complete works have made a lasting contribution to children’s literature. In 2013, he was the recipient of the Distinguished Arts Award at the Governor’s Awards for the Arts in Pennsylvania. The Society of Illustrators in New York  presented Pinkney with four gold medals, four silver medals, the Hamilton King Award, and in 2006, their Original Arts Lifetime Achievement Award. In 2011, he was elected into the Society of Illustrators Hall of Fame.

Pickney exhibited in over one hundred group shows within the US, and has been exhibited in Japan, Russia, Italy, Taiwan, Jamaica, Bermuda, and Honolulu. His art can be found in the permanent collections at the Library of Congress, the New York Public Library, the Delaware Art Museum, the Brandywine River Art Museum, the Philadelphia Museum of Art, the Eric Carle Museum of Picture Book Art, and the National Museum of Wildlife Art, as well as in private collections. His works have also been featured in The New York Times, American Artist Magazine, The Horn Book Magazine, the CBS “Sunday Morning Show,” and on PBS’s “Reading Rainbow.”

Pinkney illustrated for a wide variety of clients, including the US Postal Service, National Parks Service, and National Geographic Magazine. He created art for the Harry Chapin Run Against Hunger commemorative poster, a foundation that helps bring food to those in need. He was also invited to create a painting for the 30th Bologna Book Fair in Bologna, Italy and for the NASA Art Collection of the John F. Kennedy Space Center. In 2001, Pinkney was invited by First Lady Laura Bush to illustrate and design the White House Christmas Program for the Visitors Center.

In 2003, Pinkney was appointed to the National Council of the Arts (NEA) and served from 2003 to 2009. He was also appointed to serve on the US Postal Services Citizens Stamp Advisory Committee from 1982 to 1992. In 2012, he was inducted into the American Academy of Arts and Sciences in Cambridge, Mass. Additionally, Pickney was a trustee emeritus for the Eric Carle Museum of Picture Book Art in Amherst, Mass., where he was a 2014 honoree, and was a trustee on the board of the Katonah Museum of Art in Katonah, NY. He held several professorships and taught at Pratt Institute in Brooklyn, NY, the University of Delaware in Newark, and the University at Buffalo in Buffalo, NY. Pinkney is survived by his wife, author Gloria Jean Pinkney, in Westchester County, NY.

We are all better for having known Jerry Pinkney and his work. We send our sincere condolences to his family.