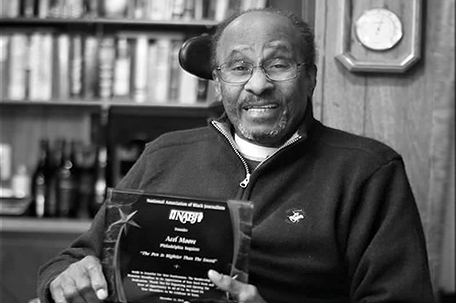 The City of Philadelphia mourned one of it’s journalistic favorite sons on Monday when Philadelphia Inquirer reporter/editor Acel Moore was laid to rest.

Hundreds gathered at the Grace Baptist Church of Germantown Monday to celebrate the life of journalistic icon Acel Moore.

Moore, a Pulitzer Prize-winning reporter and editor emeritus at the Philadelphia Inquirer, died on Feb. 12. He was 75.

Moore was remembered as a man of honor who remembered to reach as he climbed, had a true concern for those around him, and left a legacy to be proud of.

“He made an impact, not just here in Philadelphia, but nationally and internationally,” said Sarah Glover, a former president of PABJ who currently serves as NABJ’s current president. “He was such a dear man. He encouraged me, he was a shoulder to lean on, and was someone I could count on. He loved to talk about the state of the industry, and how to make sure that newsrooms better reflect the communities they serve. He influenced a lot of journalists.”

“He was a central figure in diversifying newsrooms,” said Eugene Roberts, a retired Inquirer editor.

Creating an organization that addressed the issues of journalists of color, or the lack thereof, wasn’t an easy process, especially in 1973.

For 43 years, Moore told Philadelphia’s stories as a member of the Inquirer staff. He won the Pulitzer Prize for the series “The Farview Findings”, which detailed abuses at Farview State Hospital, a maximum-security facility for the criminally insane in Waymart, Pennsylvania. Moore also spent 1979 as a Neiman Fellow at Harvard University.

In addition to his work with the Inquirer, Moore appeared as one of the panelists on the program “Black Perspective On The News”, which aired on WHYY-TV and was hosted by another PABJ/NABJ founder, the late Reggie Bryant.

But while he was best known as journalist, Moore had other interests as well, said Gerald Davis, a longtime friend.

“Acel was truly a renaissance man,” Davis said. “He was a journalist, a musician and an artist. He was authentic.”

After retiring from the Inquirer, Moore began working with the Prime Movers program, connecting students from Temple University’s School of Media and Communication and professional journalists with high school students to not only create school newspapers, but also to produce video and audio newscasts and digital content.

Moore is survived by his wife, Linda, a son, Acel Jr., daughter Mariah, a sister, Geraldine, a brother, Michael, and a host of nieces, nephews, cousins and friends.

Requiem for a Trailblazer