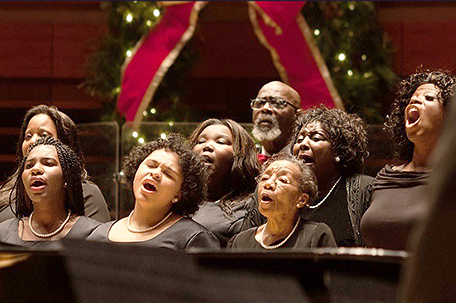 Dr. J. Donald Dumpson is intently reviewing the musical arrangement with his chorus. They are singing a gospel favorite, their pitch is perfect and the harmonies are in sync. He is telling them that he wants more feeling. He wants them to move as though they believe it.

“Let’s pick it up,” the choir director commands the chorus while waving his conductor’s hand against the backdrop of musicians in the sanctuary of the historic Bright Hope Baptist Church. The North Philadelphia location is where the choir is rehearsing for its upcoming annual performance at the Kimmel Center for Performing Arts.

“A Soulful Christmas” has become a Philadelphia holiday tradition, sought out by subscribers for its wide range of repertoire and its heartfelt rendering of spiritual, gospel and classical sacred music. The choir is rehearsing a gospel song of supplication called “Jesus is on the Mainline,” and Dumpson, who serves as the program’s artistic and music director, wants more from the singers’ depths, as they prepare for the sixth season’s performance

“So we’re stepping,” he says to the chorale members, referring to the way in which the singers move in choreographed unison, “but it’s very academic. I want you to dig deep with every step. I mean really.” He pivots from music teacher to conductor, leading 100 members, who will comprise the nearly 500-member chorus, representing 11 Philadelphia-area church choirs.

It’s as if he is reminding them of what they believe about Jesus and how he died for their sins.

“We can’t just go through the motions in rehearsal,” said Dumpson, who knows that the performance is just one week away on Tuesday, November 11, 2018 at 7:30 PM. “We have to practice really living it. Faith without works is …”

“Dead,” the chorale answers at once, the chorus of “mm’hmms” and “Amens” swelling as Dumpson guides and instructs.

“That’s it, so let’s move on,” Dumpson says, as notes on the piano ring out, signaling preparation for the next musical stanza. 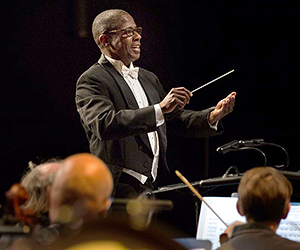 The tradition of  “A Soulful Christmas”

The annual “A Soulful Christmas” returns for its sixth season with an uplifting communal gathering of regional choristers, performing holiday spirituals and gospel favorites. They will be led by Dumpson, the artistic and music director.

The program, as in prior years, will recognize one who has greatly contributed to the body of gospel music. Past honorees have included gospel great such as Shirley Caesar and Edwin Hawkins,

This year’s honoree is award-winning gospel singer Dottie Peoples, who is known for her “thought-provoking” and “life-affirming music that has captured audiences throughout the world.”

The program tradition allows long-time contributors to the gospel and secular music realm —  many who may not be largely known — an opportunity for recognition of their great bodies of work, says Dumpson.

“We should take the opportunity to honor those who have contributed greatly, but are not widely known or recognized for their work,” he said. “It’s a great to give them their flowers while they can appreciate them.”

Dumpson has devoted his life to arts ministry, education and performance. He has over 40 years of experience as a conductor/keyboardist, music minister, and events producer. He is president and CEO of Diverse Arts Solutions, a division of J. Donald Dumpson Productions, LLC, as well as, the founding director of the Westminster Choir College Jubilee Singers and the Philadelphia Heritage Chorale. He obtained a bachelor’s, master’s and Ph.D. in music education, all from Temple University.

He currently is the Minister of Music and Arts at Arch Street Presbyterian Church. Dumpson also served as the Minister of Music at Bright Hope Baptist Church for 25 years. His mission is to help build bridges for creative cultural exchanges through arts ministry and music education. Sacred music in all of its genres, and the preservation of the gospel legacy help him achieve his mission.

Gospel music and its sacred roots

Gospel music lies at the root of most forms of American popular music. Originally conceived by American slaves as a synthesis of African tribal rhythms and the Christianity of their captors, gospel music has long stirred souls — and social movements — around the world. Odes to freedom like “We Shall Overcome” and “We Shall Not Be Moved” have been adapted and sung from Selma to Tiananmen Square.

“Gospel music has not really been viewed as something you can study, a skill that you can learn,” Dumpson says, even though gospel music is pervasive, performed by popular acts such as Kirk Franklin and referenced in song after song from Aretha Franklin to D’Angelo. “But it’s an overall cultural problem that we don’t start requiring that our gospel artists be more versed in music — in the music language, in the music culture, in reading music, in understanding music theory.”

The musical director is referring to attitudes which tend to view gospel as a powerful spiritual vehicle that should not be hollowed out by technical perfectionism, as well as to what he views as a more mainstream reticence to recognize the theology fueling its power.

“We are trained to sing in the European style,” says Valerie Gaye, executive director of the Art Sanctuary, who also is a classically trained musician. She has studied voice, piano and organ and the curricular treatments of music across genres.

“Attitudes, beliefs, and institutional histories are bent toward European standards,” she said. “Gospel singing is reserved for church and not considered proper or sophisticated.”

Gaye applauds Dumpson for endeavoring to preserve and reserve the art form and recognizes “Soulful Christmas” as an attempt to change these biases. Her observation of Dumpson’s professional generosity is reflected by the chorus members.

“They seem to sing with emotion rooted in their own stories.” Gaye said. “It appears that Dr. Dumpson has a way of training choir members to embrace the more painful memories of their lives, and to bring its memories into the music as an offering to God and to the listeners. Each concert is a form of communal prayer, less a test in flawless execution.”

“There’s something genuine about gospel music,” says Dumpson. “It brings us all back home. You have to enter into it with a sense of calling.”

There is a legacy to the calling, according to Dumpson, who describes gospel as a music art form steeped in history. Additionally, gospel music often documents some of history’s biggest moments.

“When you talk to participants in the civil rights marches, what they want to talk about is music,” says Serena Blanco, the president of the Gospel Music Preservation Alliance. It is the Philadelphia affiliate of the National Convention of Gospel Choirs and Choruses, which was established in 1932 by gospel pioneer Dr. Thomas H. Dorsey.

The prominence of the genre is often referenced by events such as the Rev. Dr. Martin Luther King Jr’s hour-long speech in Selma in February 1965, followed by two hours of singing.

“The music was actually where transformation happened,” noted Blanco.

Gospel music provides a lens on history distinct from archival work focused solely on the big speeches and legislative changes. Dumpson is dedicated to preserving and protecting the historic underpinnings of gospel music in its totality from its evolutionary roots of spirituals, to the most at-risk music from the “Golden Age of Gospel,” roughly 1945 to 1975, right up to the present’s contemporary gospel offering.

“This music survives because it works. It is a transformative agent because it’s honed and burnished through centuries of blood and loss and belief,” Dumpson said. “You don’t sing another song in another language in a faith tradition. You don’t share unless you think there’s some power in it.”

Audience members certainly believe this musical genre has power. They watch performances in venues that range from humble storefront churches to opulent cathedrals, and they appear drawn in as if they, too, are participating in the testimony and proclamation. Tissues are often dabbing eyes as soon as the second piece begins.

When historians explain why gospel music holds an unrivaled place in the history of American culture, they describe the gospel’s honest dealings with the spectrum of human suffering, according to Blanco. “Singers don’t need to be perfect pitch so much as they need to be willing to surrender their whole selves,” she said.

Gaye praises Dumpson for elevating the gospel performance of community performers, while also creating opportunities for them to perform in venue such as the Kimmel Center.

“Many community artists have little chance of auditioning or performing in some of the established musical venues,” she said. “However, I have witnessed Dr. Dumpson working with them and elevating them to levels of excellence beyond their expectations. He brings out the best in the everyday person, aspiring to perform, if they are willing to work.”

Gaye’s sentiment echoes throughout the rehearsal hall as the chorus, training for this more spiritual venue at the Kimmel, demonstrates mastery of a different and uncharted kind of curriculum developed and directed by Dumpson.  There is no doubt the raw ingredients were already there.

Performing Arts series presents A Gospel Celebration, honors an art form with the power to uplift