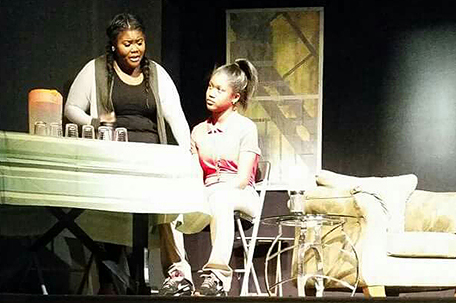 As soon as the stage lights went up at Stagecrafters Theater, the drama was thick.  The audience is instantly engaged as we learn the first secret of a terrified mother Kara (Nastalgia Jenkins) giving her teenage daughter Jenna (debut actress Wyzairah Brooks) an emergency cell phone to contact her grandparents—very much against her husband’s strict rules.  As the play progresses, we understand why Kara is in so much fear in her own home.

Kevin (Kyson Martin) is a returning Army war veteran plagued with PTSD and suffering with coming to terms with a war injury that left him blind.  He is miserable and very much hardened by his experiences, forcing his family to walk on eggshells, never knowing when he will have one of his episodes.  Kevin determines who can enter his home through a code that Kara and Jenna use—if it is ok, he holds up one finger; if not, he holds up two.  Although this creates comical energy in the audience, it is no laughing matter as their lives are so restricted based on Kevin’s behavior. 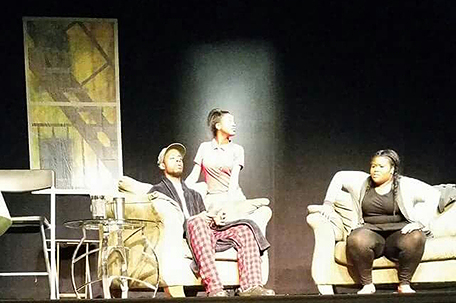 Once a devout Christian, Kevin is no longer interested in going to church or seeking counsel, which causes his loved ones great dismay.  War buddy Rob (Coby Jack) attempts to lend a hand, sharing his own experiences battling PTSD, but Kevin is disinterested.  Instead he decides to become a recluse, sitting in pajamas and an Army hat most of the time.

The family becomes extremely disconnected through religion as Jenna leans closer to God but also into the wrong hands of a trusted and seemingly God-fearing elder, Grandma Ruby’s (Andrea Blassingame) younger boyfriend James (Craig McLaren).  The family soon finds themselves in a downward spiral and sees no immediate way out—but through the grace of God.

‘Lord I Prayed’ is teeming with themes of religion, PTSD, child abuse, war veterans’ ongoing battles, family and redemption all displayed through fantastic actors who really displayed a passion to be on stage.  It was a pleasure to watch the family experience moments of peace, joy, drama and tribulations to get back to a better place where each of them was fulfilled.  Director and producer Deeva “Dell” Gordon did an exceptional job bringing this production to life while explaining the importance of the themes of PTSD and child abuse to her life. Portions of the ticket proceeds went to local veteran organization the National Federation of Black Veterans Network.  Although the production wrapped on May 1st, it will have a tentative June running date.  Stay tuned for more information about ‘Lord I Prayed’, this is a play that should not be missed.

‘Tomorrow Can Wait’—A Production Striving To Keep The Faith