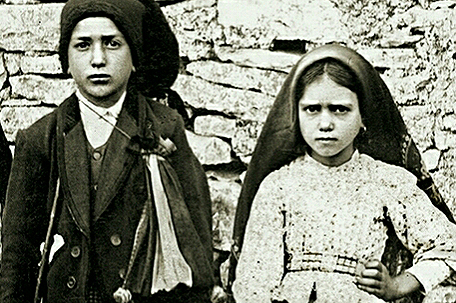 ABOVE PHOTO:  Jacinta and Francisco Marto, two of the three children in this cropped photo, whom the Virgin Mary revealed her famous “three secrets” in Fátima, Portugal. (Photo by Joshua Benoliel)

FATIMA, Portugal — Pope Francis added two Portuguese shepherd children to the roster of Catholic saints Saturday, honoring young siblings whose reported visions of the Virgin Mary 100 years ago turned the Portuguese farm town of Fatima into one of the world’s most important Catholic shrines.

Francis proclaimed Francisco and Jacinta Marto saints at the start of Mass marking the centenary of their visions. A half-million people watched in the vast square in front of the shrine’s basilica, the Vatican said, citing Portuguese authorities. Many had spent days at Fatima in prayer, reciting rosaries before a statue of the Madonna. They clapped as soon as Francis read the proclamation aloud.

“It is amazing. It’s like an answer to prayer, because I felt that always they would be canonized,” said Agnes Walsh from Killarney, Ireland. She said she prayed to Francisco Marto for 20 years, hoping her four daughters would meet “nice boys like Francisco.”

“The four of them have met boys that are just beautiful. I couldn’t ask for better, so he has answered all my prayers,” she said.

The pontiff left Fatima on Saturday afternoon after a stay of less than 24 hours. From his popemobile he saluted thousands of people lining the streets who cheered, waved flags and shouted “Viva o Papa!”

Francisco and Jacinta, aged 9 and 7, and their 10-year-old cousin, Lucia, reported that on March 13, 1917, the Virgin Mary made the first of a half-dozen appearances to them while they grazed their sheep. They said she confided in them three secrets — foretelling apocalyptic visions of hell, war, communism and the death of a pope — and urged them to pray for peace and a conversion from sin.

At the time, Europe was in the throes of World War I, and the Portuguese church was suffering under anti-clerical laws from the republican government that had forced many bishops and priests into exile.

“Our Lady foretold, and warned us about, a way of life that is godless and indeed profanes God in his creatures,” Francis said in his homily. “Such a life, frequently proposed and imposed, risks leading to hell.”

He urged Catholics today to use the example of the Marto siblings and draw strength from God, even when adversity strikes. The children had been threatened by local civil authorities with death by boiling oil if they didn’t recant their story. But they held fast and eventually the church recognized the apparitions as authentic in 1930.

“We can take as our examples Saint Francisco and Saint Jacinta, whom the Virgin Mary introduced into the immense ocean of God’s light and taught to adore him,” he said. “That was the source of their strength in overcoming opposition and suffering.”

The Martos are now the youngest-ever saints who didn’t die as martyrs.

Before the Mass, Francis prayed at the tombs of each of the Fatima visionaries. The Marto siblings died two years after the visions during Europe’s Spanish flu pandemic. Lucia is on track for possible beatification, but her process couldn’t start until after her 2005 death.

At the end of the Mass, Francis offered a special greeting to the many faithful who flock to Fatima in hopes of healing.

Participating in the offertory procession Saturday were Joao Baptista and his wife, Lucila Yurie, of Brazil. They were with their son, Lucas, whose medically inexplicable healing was the “miracle” needed for the Marto siblings to be declared saints. Lucas and the pope embraced.

The boy, aged 5 at the time, had fallen 6.5 meters (21 feet) from a window in 2013 and suffered severe head trauma. His doctors said he would be severely mentally disabled or in a vegetative state if he even survived. The boy not only survived but has no signs of any after-effects.

“We thank God for Lucas’ cure. We know in all faith from our heart that this miracle was obtained with the help of the little shepherd children Francisco and Jacinta,” Baptista told reporters earlier.

In 2000, Pope John Paul II beatified the Marto siblings during a Mass at Fatima and used the occasion of the new millennium to reveal the third “secret” that the children reported they had received from the Madonna. The text, written by Lucia, had been kept in a sealed envelope inside the Vatican for decades, with no pope daring to reveal it because of its terrifying contents: a “bishop dressed in white” — the pope — on his knees at the foot of a cross, killed in a hail of bullets and arrows, along with other bishops, priests and various lay Catholics.

John Paul II, now St. John Paul, credited the Virgin Mary with saving his life in an assassination attempt in St. Peter’s Square on May 13, 1981 — the same date of the first Fatima vision. One of the bullets fired at him rests in the crown of the statue of the Virgin at the Fatima shrine.

The impending canonization of the children had led to speculation that a fourth “secret” remained, but the Vatican says there are no more secrets related to the Fatima revelations.