“Pope Francis: A Man of His Word” — Papal profile paints intimate portrait of the people’s pontiff 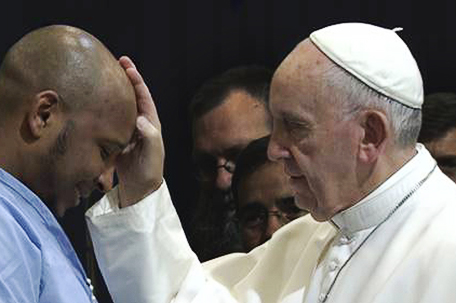 Who is Pope Francis? Baptized Jorge Mario Bergoglio, he was born in Argentina on December 17, 1936. He would follow his calling at an early age by entering the seminary while still in his teens.

After being ordained, he began his career teaching theology. He was appointed Archbishop of Buenos Aires in 1998, and subsequently named a cardinal three years later by John Paul II.

When he became pope in March of 2013, he made history by being the first Jesuit, the first from the Americas, and the first Francis. He took that name in honor of Francis of Assisi, the saint generally regarded as the one most closely mirroring Christ’s compassion for the poor.

Directed by three-time, Oscar-nominee Wim Wenders (“Buena Vista Social Club,” “The Salt of the Earth” and “Pina”), “Pope Francis: A Man of His Word” is a poignant profile which follows the peripatetic pontiff around the planet as he executes his papal duties. You get the sense that this is a humble person who prefers to downplay pomp and circumstance in favor of making himself as available as possible to the masses that compose his flock.

Driving around in a modest sedan instead of a stretch limo or the ornate Popemobile, his high priority points-of-call have included children’s wards in hospitals, prison yards of correctional facilities, and the historic Auschwitz concentration camp site. It is clear that he feels compelled to literally heed Jesus’ plea to minister to “the least of my brethren.”

Again and again, Pope Francis’ sermons, touching on timely themes ranging from poverty to pollution, exhibit a sincere concern for the underclass and the disenfranchised. During an address to a joint session of Congress, tears can be seen welling up in the eyes of members on both sides of the aisle.

A fitting portrait of the “People’s Pope.”

Rated PG for mature themes and images of suffering

In Italian, Spanish, German and English with subtitles

To see a trailer for Pope Francis: A Man of His Word, visit: https://www.youtube.com/watch?v=MOmY8i-uBcY