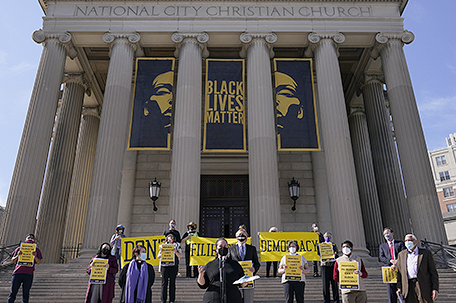 ABOVE PHOTO: Rev. Liz Theoharis, center at microphone, co-director of The Poor People’s Campaign, speaks outside National City Christian Church in Washington, Monday, April 5, 2021. A coalition of interfaith leaders and activists met in Washington and online to demand an end to the filibuster, calling it an arcane and racist tactic that blocks the passing of moral policies. (AP Photo/Susan Walsh)

Christian leaders representing hundreds of thousands across the country joined the Poor People’s Campaign: A National Call for Moral Revival and released a joint statement that calls on the White House and Congress to end the filibuster and quickly pass legislation to protect voting rights and protect democracy and ensure a living minimum wage.

Rev. Dr. William J. Barber II, president and senior lecturer of Repairers of the Breach and co-chair of the Poor People’s Campaign, called out supporters of the filibuster as advocates or enablers “of systemic racism, voter suppression, greed, the denial of health care, and the denial of living wages.”

“The filibuster is a centerpiece of the arcane, obstructionist rules of the United States Senate,” Barber said. “It bars that body from the deliberative role it is supposed to have. The filibuster discourages public debate. It impedes the public’s capacity to find out whether or not their elected representatives are blocking legislation that would serve them and lift them up. The filibuster creates an impoverished democracy.”

All of the faith leaders who took part in Thursday’s conference and signed the Pastoral Letter to the Nation said they recognize the urgency for moral policies to be passed. The letter, which will be sent to the U.S. Senate, states in part:

“Many people have supported the filibuster as a procedural rule that promotes bi-partisanship by encouraging Senators to work across the aisle in pursuit of policies that benefit all Americans. While this may be a noble ideal, the sad reality is that the filibuster has been used over and again to subvert democracy by denying the will of the overwhelming majority of Americans who want to protect the promise of unfettered access to ballot for every American. The filibuster must step aside so that democracy can survive.”

“As a white Christian, as a pastor, and a biblical scholar I’m motivated to speak out against using the filibuster in this country to filibuster democracy, to the filibuster the expansion and protection of voting rights, to filibuster living wages and healthcare and housing and adequate guaranteed incomes and debt cancellation and water and sanitation and housing rights and so much more,” said Rev. Dr. Liz Theoharis, co-chair of the Poor People’s Campaign and director of the Kairos Center for Religions, Rights and Social Justice

“Our sacred texts are clear that those in positions of power are called to set forth laws that protect the poor; that impose fair taxation systems, that call for canceling debts, for paying living wages — that protect the voices and the demands of all people not just an elite select few who are rich and white and powerful,” she continued.

“The filibuster and voter suppression bills across the country have been united in unholy wedlock and yet having the nerve to be dressed up in a tuxedo of political respectability…It’s morally reprehensible, it’s democratically unsustainable and we have a clear choice in this battle,” said Rev. Dr. Frederick Douglass Haynes, III, senior pastor of Friendship West Baptist Church in Dallas. “Will we have a government by the few for the few or will we have a government by the people and for the people?”