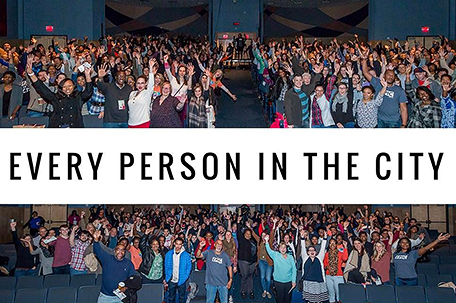 At a time when church attendance is declining among college students and young professionals, in just 10 years, Epic Church has grown from a handful of people meeting in a small movie theater to more than 2000 meeting at four different locations around the city.  The name Epic stands for Every Person In the City which is represented in its diverse and millennial congregation.

From the first year, Epic has been a socially conscious church with a passion to serve those in need across Philadelphia. Lead Pastor Kent Jacobs explains, “In a time where many churches are known for what they’re against, we want Epic to be known by what we are for. We are for Philly.” This year these projects included a weekly homeless outreach, fighting hunger with Share Food, putting on the city’s largest Easter egg hunt for 7,000 people in Roxborough, and hosting a 900 person prom called Night to Shine for people with special needs. Thousands of volunteer hours are spent each year serving kids, people with special needs, and those who are homeless.

This past summer Epic members donated $26 thousand to several nonprofits in Philadelphia, one the nonprofits was Turning Points for Children, a support program that provides help to youth who have aged out of the foster care system.

Epic Church hosted a Ten Year Celebration event and Epic music album release on Sunday, September 30 at the historic Keswick Theatre, located in Glenside, Pennsylvania. Epic Church puts an emphasis on the importance of music, creativity, and excellence in its worship services.  EPIC MSC, a music group based out of Epic Church, will be releasing its debut EP, featuring original music inspired by a sound that is a mix of modern-pop and Philly-soul, at the Ten Year Celebration event.

Epic’s locations are in West Fairmount Park at The School of the Future located at 4021 Parkside Avenue, in Center City at the Suzanne Roberts Theatre at 480 S. Broad Street, in Fairmount at the Franklin Learning Center at 616 N. 15th Street, and in Roxborough at Roxborough High School at 6498 Ridge Avenue. For more information about Epic Church visit epic.church.