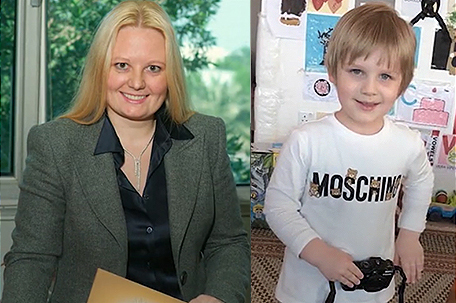 ABOVE PHOTO: Marsha Lazareva and her son, Yvan.

A Philadelphia-area mother and her four year old son are being unjustly held captive in Kuwait by the Kuwaiti government, and all Philadelphians of goodwill should rally to their cause to get them home before school starts later this month, former NFL player and Philadelphia Council of Clergy executive director, the Rev. Michel Faulkner, stated recently.

Rev. Faulkner, who was joined by Philadelphia Archbishop Mary Floyd Palmer and others at a recent news conference about this egregious human rights violation, urged government officials to do everything in their power to bring Marsha Lazareva and her son, Yvan, home. There are increasing calls on the Trump Administration by members of Congress to consider employing the Global Magnitsky Act against Kuwaiti officials if Ms. Lazareva and her son are not immediately returned.  Rev. Faulkner also asked Philadelphia-area churches, synagogues, and mosques to offer up a special prayer next weekend for the Lazareva’s swift and safe return.

Ms. Lazareva, 46, of Bryn Mawr, has been unjustly held captive in Kuwait — against all basic tenets of international law — since late 2017 when she was falsely accused of a financial crime. The Pennsylvania mom and business executive spent 474 days in a notoriously overcrowded Kuwait prison before The Kuwait Court of Appeal nullified the case against Lazareva on the basis that she was denied the right to even present a defense during her trial.  Irrefutable evidence also emerged that Ms. Lazareva had been framed for a crime that had never been committed, documents used to convict her were proved to be forgeries, and the Kuwaiti government official who was charged with forging the documents fled the country. His motive remains a mystery.

“An innocent Pennsylvania mom and her boy are being held against their will in Kuwait, and that cannot be allowed to stand,” Rev. Faulkner said. “Marsha Lazareva was torn from this community almost two years ago now, and it’s incumbent on us as Americans and Pennsylvanians to demand her immediate release and return.  Yvan should be getting ready for his first day of kindergarten in Bryn Mawr — instead he’s holed up with his mother in a sweltering Kuwait apartment. That’s not acceptable.”

Archbishop Floyd Palmer, the first female African-American archbishop in the US, added: “Not everyone is happy to see strong, successful businesswomen like Ms. Lazareva succeeding, and one has to wonder if that may have had something — or a great deal — to do with her being framed in an area of the world infamous for mistreating women. Whatever the motive, Marsha and her son must be released home to the Philadelphia area. She’s a Philadelphian, and we need her to know that her neighbors are fighting for her.”

Lazareva has lived at her current Bryn Mawr home since 2006. She was raised in Moscow and Philadelphia and educated at The Wharton School of Business in Pennsylvania. Yvan was born in Philadelphia in 2014.

Ms. Lazareva is a well-respected international businesswoman with more than 20 years of experience in private equity, investment banking, finance and strategic consulting in 32 countries. She hopes to be released in time to put Yvan in kindergarten at the end of August and to baptize him in her Philadelphia Russian Orthodox church, which she has been prevented from doing for going on two years.