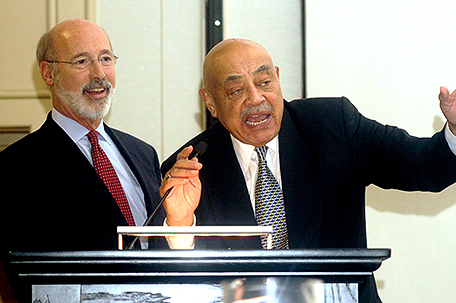 On what would have been his 89th birthday, the Philadelphia Martin Luther King, Jr. Association for Nonviolence, Inc. held it’s 36th Annual Awards and Benefit Luncheon Monday at the Sheraton Downtown Philadelphia.

The luncheon, which is the largest one held in King’s honor in the country, benefits the association, which was founded by the late civil rights activist Dr. C. DeLores Tucker, and is the only MLK Association affiliate outside of Atlanta. The funds raised benefit the King Association and the various programs it runs, such as its College For Teens program.

It’s also the occasion where the organization hands out it’s Drum Major Awards, the phrase taken from one of King’s speeches. This year’s awardees were Lee Saunders, the first African-American to serve as national president of 1.6 million member AFSCME-AFL-CIO, and Louise Moss, vice president of the Philadelphia King Association.

This year marks the 50th anniversary of King’s assasination and while the King Association luncheon is usually a non-partisan affair, many of the elected officials in attendance and even some of the awardees couldn’t help but notice that many of the same issues that King was taking on with the Poor People’s Campaign he was set to wage prior to his death were still with us.

“Dr. King — going against the advice of many in his inner circle — came to Memphis to lend support and solidarity,” Pollard said. “It would, of course, be his last campaign. This year, on the 50th anniversary of these extraordinary events,it is critical that we tell the story of Memphis again — not just the great Dr. King’s passing, and not just to celebrate the sanitation workers’ struggle for dignity and respect, but to connect Memphis to the challenges the nation still faces today, and to draw inspiration from Dr. King and the strikers as we take up the unfinished business of insuring racial and economic justice.”

Toward that end, the union will be holding a series of events commemorating the 50th anniversary of King’s assasination including an initiative in conjunction with the Church of God in Christ called “I Am 2018” that’s designed to train thousands of grassroots organizers to be the change they want to see in the world. There will also be a nationwide moment of silence for the garbage workers whose deaths brought King to Memphis and a Workers Day of Action.

In accepting her award, Moss, a retired Temple University administrator and educator, praised those who have helped her be a proven leader within the Philadelphia King Center. A dedicated board member who is also involved with many other organizations and causes, Moss has helped coordinate the association’s annual children’s Christmas party, and has provided support for the College for Teens program.

“It takes a village, because I could not do these things that I continue to do without all the volunteers and every one of you — my friends, my Continental sisters[who] are here, my Alpha Kappa Alpha sisters who are here…I’m just so excited,” Moss said.

Participants in the College for Teens program, which was founded in 2001, did a presentation highlighting their experiences, which included college visits and a field trip to the CBS-3 studios.

The mission of the King Association is to preserve and advance the work of Dr. Martin Luther King, Jr., through educating, interpreting, advocating and promoting nonviolent theory and philosophy. The Association works with schools, colleges and universities, with corporations and business organizations, with religious and community groups as well as the general public.