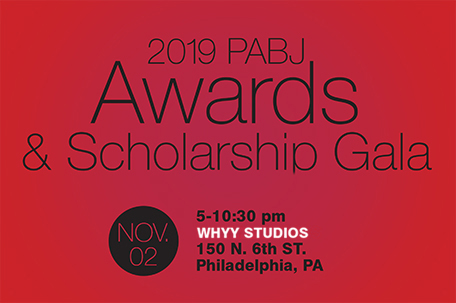 Odom and Moore have been selected for special recognition by PABJ president Manuel Smith honoring journalistic achievement that has spanned six decades.

Odom and Moore will be recognized at the annual gala alongside the six outstanding award winners PABJ earlier announced as this year’s honorees. The ceremony will be held at WHYY Studios, 150 N. Sixth Street, Philadelphia (between Race & Arch Streets).

The gala will begin at 5 p.m., with a dinner reception. The award ceremony will follow immediately afterward.

“In this current era where diverse voices are finding unique homes on multiple platforms, we are looking forward to saluting these trailblazers in broadcasting who helped set the stage for the storytelling of today,” said Manuel Smith, PABJ President, Assignment Editor, NE Bureau NBC News.

The 2019 PABJ President’s Award honorees are:

With more than 40 years at WPVI-TV/6abc, Vernon Odom is known as the big voice covering the big stories. He has reported on every presidential campaign since 1976, the Three Mile Island disaster, the MOVE confrontations, the fall of the Soviet Union and the release of U.S. hostages in Beirut and Nelson Mandela from a prison in South Africa. Odom retired earlier this year.

During her 44 years as a journalist, television anchor and communications specialist, Moore became one of the first African American women to anchor the news in the Philadelphia market, at what is now NBC10, and also was among the first to serve on an editorial board in the city, at the Philadelphia Daily News. She retired in 2017.