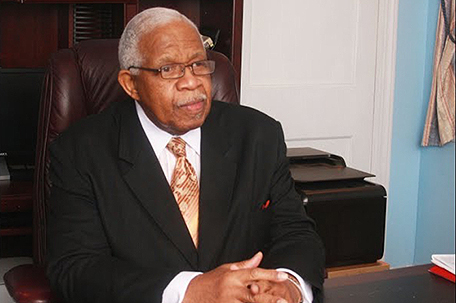 West Oak Lane Pastor Robert P. Shine, Sr., will observe his 50th anniversary of being an ordained minister on Sunday, September 19, 2021. On the same date, he will observe the 35th anniversary of the founding of Berachah Baptist Church. The celebration will kick-off with a documentary about Rev. Shine’s life in ministry and the founding of Berachah Baptist Church, at 10:30 a.m. The anniversary service will start promptly at 11:30 a.m., at the church, which is located at 6327 Limekiln Pike.

The guest preacher for the anniversary service is Rev. Levy Comb, pastor of the First Refuge Baptist Church in Camden, New Jersey.

Berachah means “blessing” in Hebrew. Shine founded the church in 1985 with a mission to “be a blessing.”

He assumed his first pastorate at the New Umbria Baptist Church in the Manayunk section of Philadelphia, where he served 15 years.

Rev. Shine’s career extends across many areas.  He is the board chairman of the African American Association for Corporate Responsibility (AAACR), chairman and charter member of the World Communication Charter School, and chairman of the Manna Bible Institute, where he has served on the faculty for more than 25 years.  He is a member of the Police Advisory Commission (PAC) of Philadelphia and presently heads the Statewide Coalition of Black Clergy.

He is also a member of the Philadelphia Association of Catholic Religious Investors (PACRI) and the Interfaith Center for Corporate Responsibility.  In addition, he is  a member of Philadelphia Citizens for Children and Youth (PCCY), the Campus Boulevard Corporation, the executive director of New Wave, Inc., and chairman of the New United Majority.  Shine was heard on radio station WDAS -AM, as host of “The Prophetic Voice” for a couple years.

Shine is the former vice president of the Philadelphia Council of Clergy and former executive secretary of the Missionary Baptist Pastors Conference of Philadelphia & Vicinity.  He was a former president of Black Clergy of Philadelphia & Vicinity.  Shine  was also the co-founder of the ministry of “Christians United Reaching Everyone” (C.U.R.E.),  and served on the board of the Afro-American Foreign Mission and on the foreign mission board of the Progressive National Baptist Convention.

Shine served as the first president of the Greater Philadelphia Evangelical Fellowship and the East Coast director of “The Harambee Movement’’ and the Inter-Cultural Ministries of Campus Crusades for Christ.  He was also privileged to lead the Koinonia Bible Conference, training pastors, lay leaders and youth workers in techniques for effective evangelism and was director of the Dr. B. Sam Hart Crusades.

Shine served as the chairman of the Christian Education Commission of the Eastern Keystone Baptist Association and as the Northwest regional moderator of the Pennsylvania Eastern Keystone Baptist Association. In addition, Shine is a member of the Philadelphia Baptist “Pastors” Conference, Philadelphia Baptist “Ministers” Conference, Evening Ministers Conference and Pennsylvania State Black Clergy Association. Throughout his life, he has continued to be a “Voice for the People.” Noted for his civic interests, Shine nonetheless provides a balanced ministry for the church.

His activities have carried Shine beyond the realm of the pulpit.  He has been regarded by many of his contemporaries as a perceptive and determined advocate for justice, public education, and ex-offender rights, voter registration and participation and for equality for all races, and is an avid labor supporter. Shine and his wife Barbara, who is the love of his life, are the proud parents of four adult children. All church members, guests and representatives from the media will be required to wear face masks during this in-person service. Worshippers will be spaced apart.