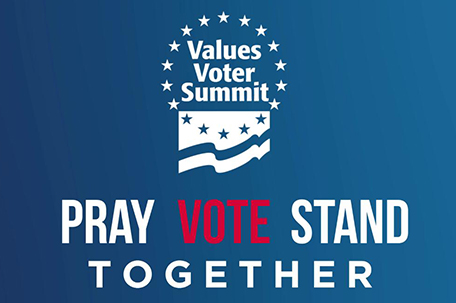 President Donald Trump appealed to Christian leaders this weekend at the Values Voter Summit, reminding the audience of his commitment to preserving religious freedom.

“Our rights come from God Almighty, and they can never be taken away. Together we will protect those God-given rights,” he said, as reported by CBN News.

Pastor Andrew Brunson, who was held captive in Turkey for two years, opened the ceremony with a prayer:

“Father God, I ask now for an impartation of your Holy Spirit, may the fullness of the spirit of Jesus rest upon President Trump that he be anointed with wisdom and understanding with your counsel and might with knowledge and fear of the Lord and accordingly, may President Trump not judge by what he sees with his eyes or decide by what he hears with his ears or lean on his own understanding, but may he recognize your prompting and move according to your guidance,” Brunson said.

He continued to pray for discernment and strength in the battles surrounding the president. Trump later told the crowd that it was not easy to bring home the pastor, but that his recovery was worth the effort.

The president’s speech to the summit came in the midst of growing concern from conservative evangelical leaders for the president’s removal of troops in Northern Syria, which leaves religious minorities — including Christians — open for a potential attack.

“The Kurds are tending to leave and that’s good,” the president said. “Let them have their borders. I don’t think our soldiers should be there for the next 50 years. So let’s see what happens. We’ve paid a lot of money to the Kurds. They are fighting for their land,” he said.

President Trump also noted that he had “directed $50 million to support Christians and other religious minorities in Syria,” last week.

“Made it in honor of Pastor Brunson, people that have done a great job for us. It’s going to help Christians in Syria. Not an easy situation for them. In total my administration has provided more than half a billion dollars for support for religious minorities and others suffering from atrocities in Syria and Iraq alone,” the president added.

He also told his audience that no other US president would do what he has done for religious freedom in other countries nor would have found a way to release Brunson.

He concluded to a standing ovation: “In America, we don’t worship government, we worship God,” President Trump asserted.

“We will reach new heights, make new breakthroughs, and we will strengthen the bonds of love and loyalty that unite us all as citizens, as neighbors, as patriots, as Christians, as people of faith. As one people, one nation, and one United States of America, we will stand as a light of liberty, a land of courage, and a home for proud people of faith. Forever and always, Americans will believe in the cause of freedom, the power of prayer, and the eternal glory of God.”