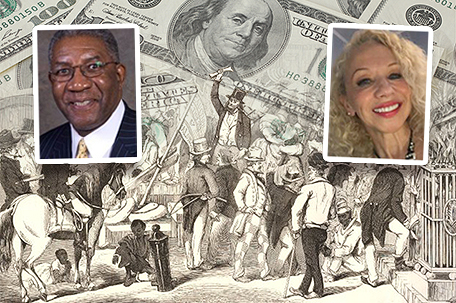 By Wendell Griffen and Lauri Umansky

Princeton Theological Seminary, the second-oldest institution of its kind in the United States, recently announced a plan to “repent” for its historical ties to slavery. In 2016 the seminary commissioned an audit of the institution’s historical embroilment in the slave economy. Ties ran deep, the study found, with as much as 40 % of the seminary’s antebellum revenue tracing to slaveholders or slavery-profiteers.

In addition, the seminary supported the racist American Colonization Society, which sought to send freed slaves to Liberia rather than support racial integration and justice here. Several buildings on campus bear the names of ACS leaders.

The plan for reparations includes creating 30 new scholarships for descendants of slaves, appointing a full-time director for the Center for Black Church Studies, switching out building names to honor influential African Americans and instituting curricular changes that reflect upon the school’s disgraceful past. The board of trustees voted unanimously to set aside $27.6 million of its approximately $1 billion dollar endowment to fund these projects in perpetuity.

This is all well and good, says the school’s Association of Black Seminarians (ABS), but it is not good enough.

First, the numbers do not add up. Even the lowest-end calculation of the institution’s total percentage of historical wealth gained from direct ties to the slave economy – 15 percent – results in a reparations figure of $150 million. Bargain rate repentance rings hollow.

More importantly, as reported in The Daily Princetonian, the student newspaper of the “other” Princeton, ABS president Nicholas Young contends that “the demands of ABS were never fully articulated to the board.” How can meaningful reconciliation or reparations take place without the full participation of those on the receiving end of the enduring and horrific historical injuries in question? A flawed process netted a flawed result.

A genuine reparations process redistributes not only money but also power.

As announced and enacted, Princeton Seminary’s “repentance” amounts to a gift, not a genuine plan for reparations. Gifts do not come free, even if they are given with fine intentions. Gift-giving brings bestower and recipient into a relationship of obligation in which power skews toward the giver, debt toward the receiver. Owing a “debt of gratitude” in perpetuity looks an awful lot like debt peonage. To owe such a debt for what is rightfully yours, for what sits wrongfully – criminally, egregiously, obscenely wrongfully – in the pockets of the giver, amounts to an outrage of epic proportions.

Genuine reparations for slavery will cost a lot more and hurt a lot more than the gesture of the seminary’s board of trustees, generous and well-intentioned as it might appear. Real reparations for slavery will require the beneficiaries of white supremacy to give up both money and power. Are the repentant trustees ready for that? If so, they should go back to the boardroom, this time with the black seminarians, and hammer it out for justice and freedom – as we should do all over this land.

We do recognize that beneficiaries of white supremacy are not accustomed to treating victims as equals. But reparations requires, at minimum, that beneficiaries divest their unjustly held power to set the terms and conditions for how historical inequities will be remedied. At the outset and before announcements are made about how much will be paid to whom for whatever purposes, beneficiaries of racial injustice must admit their moral and ethical blindness about, and disregard for, the power imbalance between themselves and the historical victims of chattel slavery. And the most obvious example of that blind disregard occurs when beneficiaries of slavery – acting alone – decide who gets to be heard concerning what should be done to remedy the consequences of slavery.

Consider Princeton Seminary’s situation. Who decided that a legitimate reparations process could occur without full and continuous ABS presence? How was this decision reached? Who decided that black seminarians do not matter, are not competent and have no power to decide what the trustees would be asked to approve? How do trustees defend as morally and ethically just a reparations process that did not involve the active presence, involvement and right of black seminarians to help calculate the amount of reparations to be made?

Black seminarians have been forced to criticize the school’s announcement only because they have been treated as unworthy to participate fully in the process. They have now been positioned as ungrateful and ungracious gift recipients. The seminary’s announcement is not, therefore, a cause for celebration. It is, rather, a glaring example of how cultural blindness operates to produce culturally incompetent outcomes even when actors have good intentions.

This brings us to remind all concerned, but especially the people who hold decision-making power at theology schools and other institutions struggling to address the issue of reparations, that cultural competence is always measured by outcomes, not intentions. Culturally competent outcomes require the skillful use of relevant knowledge in cross-cultural situations to produce morally and ethically just and effective results. No matter how well intentioned Princeton Seminary’s leaders may be, the ability to say “oops” or “we could have done this better” – after having excluded black seminarians from full inclusion in a process intended to begin to remedy the inequities of slavery – highlights the lack of knowledge and skill required for doing reparations work in a way that is culturally competent.

We all can and should hope for nothing less than a reparations process that is culturally competent. We encourage all parties to work toward that goal.

Opinion: Views expressed in Baptist News Global columns and commentaries are solely those of the authors.