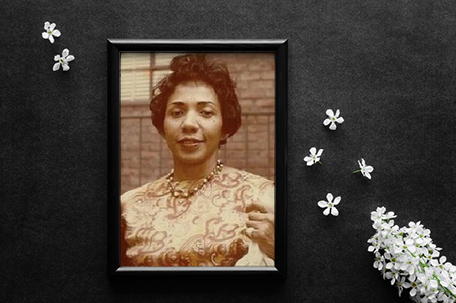 Mama Sybil, as she was affectionately known, was originally from Jamaica but moved to the United States in 1947. She was first employed as a secretary for a group of attorneys on 125th St. in Harlem, but eventually started working as a coordinator in the NAACP’s youth department — and in fact coordinated the various youth organizations from around the country to participate in the 1963 March on Washington.

“We’ve always had women in the movement who are behind the scenes, making things happen. They are the Queen Mothers,” explains Dr. Leonard Jeffries, former chairman of the Black studies department at City University of New York, and protégé of Dr. Clarke.

“She was one of the truly important Queen Mothers,” continued Dr. Jeffries, uncle of U.S. Congressman Hakeem Jeffries (D-Brooklyn). “And she really had a long distance run, living with us until age 95.”

Mama Sybil worked as an assistant for Dr. Clarke for more than a decade before marrying him on September 21, 1997, and was instrumental in organizing the movement of his books and documents to the Atlanta University Center, as well as the Schomburg Center for Research in Black Culture shortly before his death in July 1998.

In a final statement he asked to be publicly released after his death, Dr. Clarke wrote:

“ . . . Sybil, your loving touch, notwithstanding, your arms were not long enough to bow with the eminent moment. But, while I must make this physical departure, spiritually, I will not leave you and God will take care of you. When you feel a cool breeze blow across your face every now and then, just know that it comes from the deep reservoir of love that I hold for you. Oh, by the way, Christ is Black; I see him walking at distance with Nkrumah. I think they are coming over to greet me.”

A viewing for Williams-Clarke will be held Friday, October 25th from 4-8 p.m. at Benta’s Funeral Home, 630 St. Nicholas Avenue, New York, NY.; funeral will be conducted at 10 a.m. the following day; burial at Rose Hill Cemetery in Linden NJ immediately after.