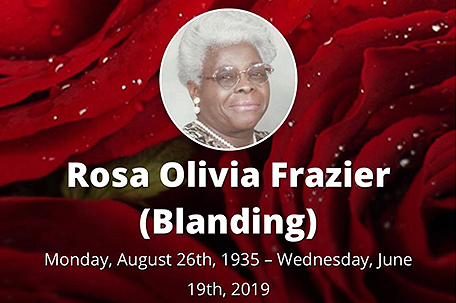 In 1936, the family moved to Norfolk, Virginia.  Rosa attended St. Joseph’s Catholic though elementary and middle school.  She went on to graduate from Booker T. Washington High School in Norfolk, Virginia in 1953.

Rosa attended New York University and The Pratt Institute where she studied Social Work and Urban Affairs. She worked for the Community Action Center in Brooklyn for many years.  There, she provided assistance services to end hunger and poverty.  Her role expanded to engage community members and organizations to improve public policies impacting their daily lives.

The family then moved back to Norfolk, Virginia where Rosa worked for the Norfolk Division of Social Services.  As an eligibility worker, she interviewed and screened applicants in addition to providing services for their children.  She was also trained and certified as a drug rehabilitation counselor and medical technician through the Commonwealth of Virginia.

Rosa moved to Detroit in 1997 and provided loving care and support to her daughter and granddaughter. There she joined Triumph Church under the leadership of Pastor Johnathan Kinloch, Jr.  Rosa served her community well.  She helped to launch the Detroit Chapter of the Sisters Network, a national organization to support African American women in the fight against breast cancer serving as its vice-president.  Additionally, she supported the neighborhood efforts by serving as a troop leader for the Rosedale Park Girl Scouts and serving on the Rosedale Park Civic Association Board.

Rosa was clearly the matriarch of the family with six children, nineteen grandchildren,  fourteen great grandchildren and one great-great grandchild.  Rosa loved God and taught her children the importance of loving, praising and honoring the Lord; to be good, honest and hardworking people, to not to look for a hand out, but offer a hand up to others.  One of her signature phases was “No matter what happens, never give up on each other, especially your children.”