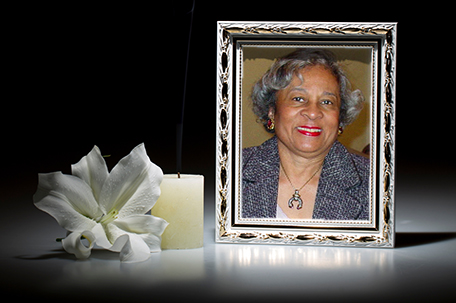 Marjorie Gilliam Chew passed away peacefully at her home following a brief illness on Monday, August 12. She was 90. Marjorie was born in Philadelphia on January 8, 1929 to the late Ulma E. and Frank M. Gilliam, Sr. Marjorie, affectionately known as “Margie,” was one of five children.

She was educated in the Philadelphia Public School System and was a graduate of Germantown High School. She earned a bachelor’s degree in Sociology with a minor in Psychology from Howard University in 1950.

She loved her time at Howard and developed many lasting friendships. She also was initiated into Delta Sigma Theta Sorority, Inc. during her time at Howard. Marjorie was a proud Delta for more than six decades.

After graduating, she remained connected to her dear alma mater and participated in alumni events and class reunions.

Marjorie married her teenage sweetheart, Ramsey H. Chew, Sr., on August 16, 1951. They enjoyed fifty-six years of extraordinary love and devotion. Out of this union was born a son, Ramsey Harrison Chew Jr., and two daughters, Deborah Marjorie and Diane Elizabeth.

She was a member of St. Luke’s Episcopal Church in Germantown for most of her adult life. Her love of flowers, especially spider mums, led her to serve on the church’s Altar Guild Flower Committee for more than 30 years.

Her beautiful arrangements could be seen on the high altar the third Sunday of every month. Marjorie was faithful in her duties and was delighted to be honored by St. Luke’s Rector, the Rev. David J. Morris, in 2017 for 30 years of continuous dedication and service to the church.

Marjorie cherished her family and friends, and loved to entertain and travel with her late husband. Known for her gracious and kind-spirited nature, many people relied on her as a trusted advisor and confidant. Marjorie also had a great sense of humor and loved to dance, especially with her grandchildren.