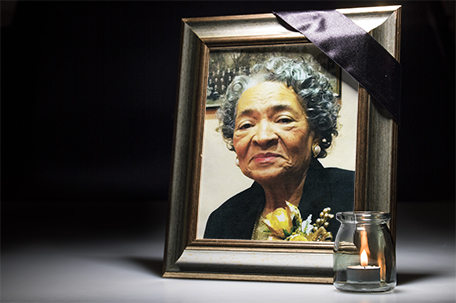 Bertha E. McMurry was born Bertha Euille to Robert Carliste Euille and Louise Euille on November 10, 1925, in Amherst County, Virginia. Bertha’s family relocated from Virginia to Philadelphia when she was 5 years old. She was educated through the School District of Philadelphia, beginning her matriculation at Paul L. Dunbar Elementary school and concluding it at West Philadelphia High School. She died on March 22, 2019.

In 1945, Bertha married George C. McMurry. Together, they raised a family, purchased a home, a barbershop and an apartment building. In 1950, she joined the Monumental Baptist Church and became a lifetime member. Bertha saw a need to serve her church and decided to join the Mary Peace Willing Workers whose purpose was to fundraise, in order to help financially support the church. She served in many capacities on the committee and was humbly honored when she was named president.

Bertha was employed at the Provident Mutual Life Insurance Company, where she worked in hospitality in the executive division. After retiring in 1979 from the company, she went to work for the Philadelphia Savings Fund Society (PSFS) in the same capacity. In her later years, Bertha volunteered for the Philadelphia Corporation for Aging as a senior companion until the age of 90.

Always one who loved to dress for any occasion, Bertha was known for her signature hat collection. When she moved from her home in University City to her apartment in East Falls, she was none too happy with having to choose which hats to take with her from her over 300 plus collection.

Bertha will be missed for her ready smile, kind words and loving heart.