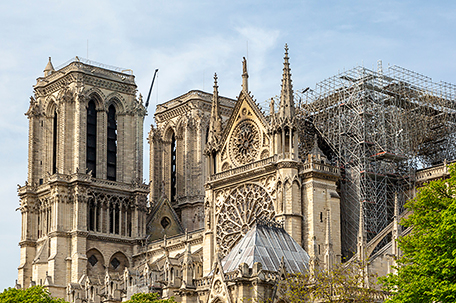 Notre-Dame Cathedral in Paris did not hold a Christmas Mass for the first time in more than 200 years, as work continues to repair the structure that was struck by fire in April.

Midnight Mass was still be celebrated on Christmas Eve, officials said, but it will took place at the nearby church of Saint-Germain l’Auxerrois.

The 850-year-old Gothic cathedral, a Unesco World Heritage site, lost its roof and tower spire during the fire.

President Emmanuel Macron has set a five-year goal for its reconstruction. In October, the French culture ministry said nearly $1.1 billion had been raised or pledged for the project.

The historic building has celebrated Christmas Mass for two centuries, closing its door only during the French revolution. At that time, anti-Catholic forces turned it, for a short time, into “a temple of reason.”

Cathedral rector Patrick Chauvet told the New York Times that this years’ service at Saint-Germain l’Auxerrois would include a wooden liturgical platform has been constructed to resemble the one at the cathedral.

“We have the opportunity to celebrate the Mass outside the walls, so to speak… but with some indicators that Notre-Dame is connected to us,” he said.

The cathedral has been undergoing restoration since the April fire. The cause of the fire remains unknown and is under investigation.

Investigators believe the cause might be negligence. They are not ruling out a “badly stubbed out cigarette” or electrical error as possible causes.

There has been no evidence found that suggests the origin of the fire was suspicious or criminal, according to officials.