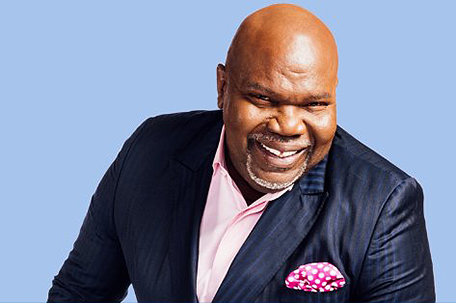 NEW YORK — T.D. Jakes doesn’t wave around the Bible or preach from Proverbs in his new OWN talk show; he’s discussed plastic surgery obsessions, questioned Bobby Brown about his troubled marriage to Whitney Houston, and talked politics with the network’s queen, Oprah Winfrey.

But the popular pastor still considers his host role an extension of his ministry.

“I think it is a very important that we don’t remain nuanced and stay in our communities or our sanctuary and not really engaged in the culture. We need to be out there listening and learning and talking and adding our thoughts to the whole mix of who we are as Americans.”

It’s just another example of how Jakes has used his powerful voice to extend his influence far beyond the Dallas megachurch Potter’s House. Jakes is a best-selling author whose books include inspirational tomes, including this year’s “Destiny” and the novel “Woman Thou Art Loosed” which led to the Hollywood film of the same name.

His Hollywood imprint also continues to grow. Besides “The T.D. Jakes Show,” he is a producer of other films, including Miracles from Heaven starring Jennifer Garner.

And he still finds time to make it back to his church to preach on Sundays.

AP: Some talk shows on today are of a more salacious nature. How will yours be different?

AP: Who do you think we are as Americans these days? In some ways, we seem very divided.

Jakes: I don’t really agree with that. I think that we are finally talking about things that we all knew existed in our nuanced areas all the while. Now we are struggling to have a conversation and it is a rough conversation. But I am used to rough conversations because it is almost like a dysfunctional family who never talks about the elephant in the middle of the room. And when you start talking about it, emotions flare and tempers flare. But that’s not necessarily a bad thing because if we can keep going through that processes, and the end of it, hopefully we’ll have resolution and somebody will call us together. …. That there is common ground and that reason should prevail over watching our country fall apart.

AP: A lot of key preachers have gotten involved in the presidential campaign. Do you see yourself doing so?

AP: There have been reports that younger people are less in tune with a religion. Why do you think that is?

Jakes: The world is changing. The way we receive information is changing. The second thing is that I don’t think contemporary parents have raised their children in church like my generation was raised – it was just a forgone conclusion. It’s Sunday morning and you’re going to church. … We skipped a generation and so we lost a generation, and I think we have to be much more intentional about communicating our faith in ways that is relevant to a broader culture who receives everything over their phones.

AP: So, is it OK on Sunday if I sleep in and watch you on TV instead of heading to church?

Jakes: I am old school. I really want people to come and because there is something about being in that … worship atmosphere that I think is amazing and special that doesn’t always cross over to television. …. However, I am really cool with the social media thing. The last five people we hired have been in our social media department. … As long as the message gets out, I don’t care how it gets out there. … I might be working myself out of a job, but that’s OK.