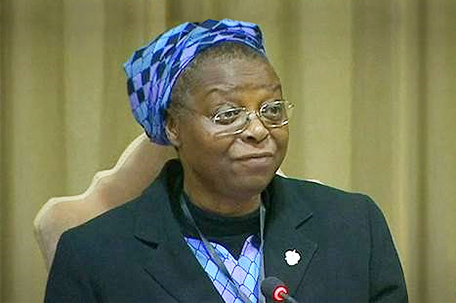 A Nigerian nun faced a Vatican summit on sexual abuse in the Church and delivered a stinging indictment to stone-faced church leaders who failed to take action against abusers.

It was the third day of the Vatican summit. Sister Veronica Openibo did not mince words.

A member of the Society of the Holy Child Jesus,  Openibo said she had watched the American-made movie “Spotlight” about a U.S. newspaper, the Boston Globe, whose reporters discovered a decades-long cover-up of child abuse within the local Catholic Archdiocese.

At the end of the film was a long list of cases and dioceses where the abuses had occurred, and reading about the number of children affected and seeing the vast amount of money spent on settlements, she said that tears of sorrow flowed.

“How could the clerical Church have kept silent, covering these atrocities?” she asked.

Openibo, who serves on the executive board of the International Union of Superiors General, acknowledged that the church has at times failed to live up to its own moral code.

“Yes, we proclaim the Ten Commandments and parade ourselves as being the custodians of moral standards and values and good behavior into society. But why did we keep silent for so long?” she said.

Openibo, one of only three women to address the event and the only speaker from Africa, went on to say the scandal had “seriously clouded the grace of the Christ mission.”

“Is it possible for us to move from fear of scandal to truth? How do we remove the masks that hide our sinful neglect?” she asked.

“Too often we want to keep silent until the storm has passed. This storm will not pass by. Our credibility is at stake,” Openibo, who has worked in Africa, Europe and the US, said.

During the summit, bishops from the United States, Europe and Australia have urged caution when it comes to universal changes in church rules, saying that local cultures could require nuanced policies. But Openibo said that church leaders should not make excuses when it comes to confronting abuse.

“The fact that there are huge issues of poverty, illness, war and violence in some countries in the Global South does not mean that the area of sexual abuse should be downplayed or ignored,” she said. “The church has to be proactive in facing it.”

The pontiff and the 190 bishops and cardinals in attendance watched videotaped testimony from survivors of abuse telling of their trauma and the cruel indifference shown by church leaders.

One woman from Africa told the summit that a priest who had begun raping her at age 15 forced her to have three abortions, and beat her when she refused him sex. A survivor from Chile told the bishops and religious superiors they had inflicted even more pain on survivors by discrediting them and protecting priests who abused.

A list of 21 “reflection points” written by the pope is expected to provide the basis for the development of new anti-abuse procedures for bishops.

Global Information Network creates and distributes news and feature articles on current affairs in Africa to media outlets, scholars, students and activists in the U.S. and Canada. Our goal is to introduce important new voices on topics relevant to Americans, to increase the perspectives available to readers in North America and to bring into their view information about global issues that are overlooked or under-reported by mainstream media.