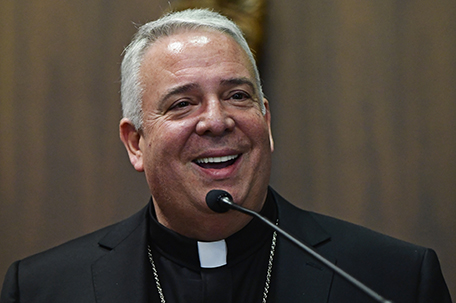 The 1.3 million parishioners of the Roman Catholic Archdiocese of Philadelphia have a new spiritual leader.

Nelson Perez, 58, who spent most of his early pastoral career in the Philadelphia area, assumed the post of archbishop in a ceremony Tuesday at the Cathedral Basilica of Sts. Peter and Paul.

Perez, the former bishop of Cleveland, is the first Hispanic archbishop to lead the five-county Philadelphia archdiocese. He is the 14th Roman Catholic bishop and 10th archbishop of Philadelphia.

He succeeds Archbishop Charles Chaput, who stepped down after turning 75 last year, the traditional retirement age for Catholic bishops.

The Mass of Installation followed a procession of hundreds of cardinals, bishops, priests, deacons and seminarians to the city’s cathedral church.

Perez attended the diocesan seminary in Philadelphia in the 1980s and served in a number of Philadelphia parishes before being named as an auxiliary bishop in Rockville Centre, New York, and then bishop of Cleveland in 2017.