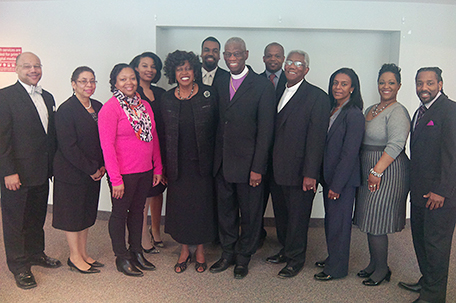 The Educational Resources and Endowment Committee (EREC) of New Covenant Church of Philadelphia, recently held its 2015 College Fair and Second Annual Scholarship Luncheon on the church campus located at 7500 Germantown Avenue.  The event was well attended by students and parents from New Covenant and visitors from the surrounding communities. 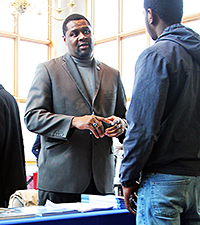 Deacon John Mackey, a member of New Covenant’s EREC Committee, and his daughter Amber proudly represented Barnard College/Columbia University. Amber, who is a freshman at Barnard, with a double major in Human Rights and Political Science, says: “I chose Barnard because I asked myself, what school is going to help me achieve all of my goals – not only academically, but in all capacities? The answer for me was Barnard.” Deacon Mackey’s older daughter Ashley is in an eight-year BS/MD program at the University of Rochester.

Monroe Griffin III, an Enrollment Specialist for Cheyney had a unique affinity for the young minority men visiting his table. Griffin was the innovator for Cheyney’s Call Me MISTER Program (Men Instructing Students Toward Effective Role Models). The program is a national teacher leadership tool that not only prepares young men for successful careers, but also provides resources that place those young men in positions to effectively impact the lives of children – particularly in the inner cities. Griffin, along with James McKelvey and Lloyd Manley/President and Recruitment Chair of the Cheyney University Alumni Chapter of Philadelphia, provided a broad spectrum of the multiple fields of study and opportunities available at Cheyney – the nation’s first HBCU (Historical Black College/University).

By noon, nearly 200 excited guests were seated at the beautifully-decorated luncheon tables, as Guest Host and Master of Ceremonies, Min. Lonnie Hunter joined in the festivities. The gifted inspirational speaker, gospel singer and educator is best known for his syndicated Praise 103.9 radio program ~ “The Lonnie Hunter Show.” Lonnie, as he is comfortable being called, entered the room to impromptu applause and ‘shout-outs’ of Get it done! – a slogan made popular through his weekly broadcasts.

Asked where his passion for youth originates, Hunter referenced his 10-year career as Dean of Students for the Chicago Public Schools, overseeing 7th and 8th graders.  He served as a mediator, with the opportunity to see situations from the point of view of the parents, the students and the teachers.  He witnessed the vast cultural divide between a staff that was predominantly white and children who were predominantly black.  Hunter said he was humbled by the experience. “If you hear nothing else today, hear me on this, Timing is everything! Opportunity is everything! Put that together with a scholarship — that’s really everything! You have to take it and make it work as a life-changer.” Hunter went on to say, “I live by two things, the only time we should be concerned about, in the Kingdom, is now; because we have a right now god.  ‘I’m gonna do it next week; I’ll start it next month’ — No! That doesn’t work.  The only time that matters is right now.”

Hunter’s engaging quick humor and very laid-back demeanor made for an inspiring and fun-filled afternoon, as dance, singing and spoken word were presented by the EREC students; and the donors who make it all possible, were recognized and applauded for their outstanding contributions

The year 2015 marked EREC’s  10th year of providing scholarship support to New Covenant’s, academically-worthy, graduating high school seniors. Its Director, Rev. John W. Mosley, Jr., who has been a member of New Covenant for thirty-four years, stated: “Annually, our goal is to provide a minimum of $1,000 – $1,500 scholarships to at least 20 students. Thus far, EREC has assisted 181 young people. Each year the support increases with the much-needed and well-appreciated donations from the congregation, community members and local businesses.