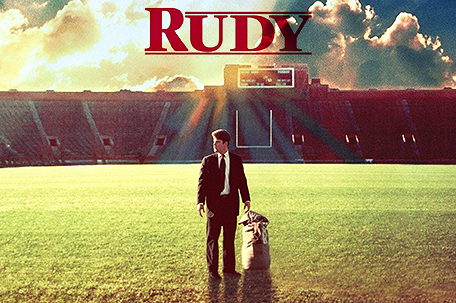 One of my favorite sports movies of all time has to be Rudy, the true story of Rudy Ruettiger.

Ruettiger came from a “blue collar” family who had a great love for Notre Dame’s football team. His father, as portrayed in the movie, really held this team up…it was the high standard of excellence. He aspired to play for the team because he wanted his father to beam about him the same way he did when he spoke of the Notre Dame Fighting Irish. Unfortunately, Ruettiger was not much of an athlete. In addition, he also wasn’t great at academics. Ruettiger had two strikes against…well three…neither his father or brother believed in him.

Undaunted, Rudy enrolled at a community college near to Notre Dame University with the help of a priest. He struggled at the community college trying to improve his grades so he can transfer to Notre Dame. He’s frustrated and his time is running out to transfer. So he goes to church to talk to his mentor, a Catholic priest. Ruettiger shares his frustration and asks the priest if there’s anything he can do to help get him into Notre Dame. The priest pauses for a moment and replies, “Son, in 35 years of religious studies, I’ve come up with two hard, incontrovertible facts: There is a God. And I’m not Him.”

I like this particular saying personally. We can often feel overwhelmed by loved ones with their burdens. Don’t we all want to have the power to life the struggle for them, the fear, and the waiting period. But understanding our purpose is to point them back to the One that can turn things around.

Ruettiger gets tutoring from a student who attends Notre Dame. Through the tutoring and friendship, his tutor learns that Rudy has dyslexia. Rudy goes on to overcome his disability and his grades improve. During all this, Rudy is constantly applying for Notre Dame and receives rejection letter after rejection letter. After two years of rejection letters, Rudy is finally is accepted to Notre Dame. He tells his father, who announces it at his job in front of everyone with Rudy front and center.

Rudy, because of his aggressive nature, becomes a part of the practice team for the Fighting Irish. Rudy is hazed, or some may call it bullying today, by the Fighting Irish team. An assistant coach notes that Rudy exhibits more drive than may team members. Rudy is allowed to suit up but isn’t put in play on the field. Rudy get frustrated and quits the team but is encouraged to stay.

In his senior year Rudy believes his family will never see him play for the Fighting Irish.. Then the miracle happens. The team that hazed him came to his defense. The team captain followed by all of the football team demanded that Rudy play in the actual game…they each lay their jerseys down each saying that Rudy can dress in their place. Rudy plays in the final kick-off. Notre Dame wins the game and the first and only time a team member is carried off the field on the shoulders of the Fighting Irish…and it’s Rudy!

Rudy was a real person just like you and I. He had many obstacles dyslexia; no family support, poor grades, poor, bullying/hazing…he even quit. But Rudy was a fighter and in the end his vision, and his declaration to his father came to pass. He played football at Notre Dame.

There is a saying I use…I don’t know if I’m the first person to say it because there isn’t anything new under the sun, but I say if you give up you only quit on yourself. You giving up only hurts you. I know the temptation is great.

You have gotten that job, met that great person, had the baby, bought your dream home, lost the weight…I’m human I get it. But giving up only guarantees one thing and that’s loss. Kayne West said in a song that, “giving up is (way) harder than trying.” Did you get that? If it is that easy to let it go then how bad do you really want it? Believing that we may have a long life do you really want to give up right now? If you’ll live to be 100, is now a good time to quit?  NO! Keep going.

Never give up on you!