Nehemiah Davis Foundation hosts the Step into Greatness Conference, and brings out hundreds of Young Professionals 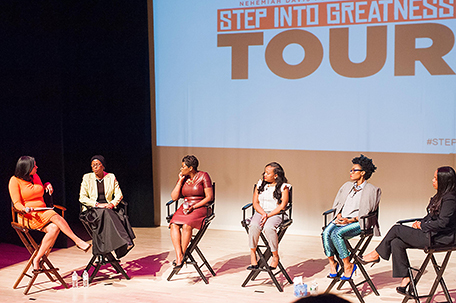 ABOVE PHOTO:  The panel of the Step Into Greatness Tour, Universal Companies co-founder Faatimah Gamble (second from left) speaks to crowd.  (Photo by Jasmine Alston Photography)

On Sunday March 23rd, the Nehemiah Davis Foundation hosted the Step into Greatness Conference at the Venice Island Performance Arts Center, in Manayunk. Over 300 attendees packed the theater Sunday afternoon to hear from professionals from a variety of industries. The business development conference was organized by young adults for young professionals with the goal of not just inspiring, but also, empowering attendees through various tools, resources and high quality information.

International motivational speaker Eric Thomas was the conference keynote speaker. For over an hour, Thomas shared stories of encouragement and strategies of empowerment with a nearly silent and attentive audience. “How many steps do you need to take in order to be great?”, Thomas asked the audience, challenging them not be focused on the act of being great, but instead focused on executing the steps well.

Thomas is best known for his motivational YouTube series, “Thank God it’s Monday,” his international conferences, and self-help books, including the “Secrets to Success” and “Greatness is Upon You.”

During the conference, The Nehemiah Davis Foundation presented the Entrepreneur of the Year Award to 15-year-old Gabrielle Jordan. Jordan, who is also the author of “The Making of a Young Entrepreneur,” started her own business at the age of 8 and is a sixth generation entrepreneur. She was presented with her award by softball all-star, Mo’ne Davis.

During the conference, young philanthropist and entrepreneur, Nehemiah Davis, unveiled his newest venture, Phounder, which will be launched later this spring. Phounder is a business director platform designed like a social media site. The directory allows users to not only market their own businesses, but also find businesses that they need. Phounder is currently offering discounted rates for entrepreneurs who decide to become early adopters of the concept.

The Step Into Greatness conference ended with an exclusive networking event for attendees to meet and interact with the panelists and each other at Manayunk Brewery.