MLK: An Interfaith Commemoration and Conversation in Social Justice 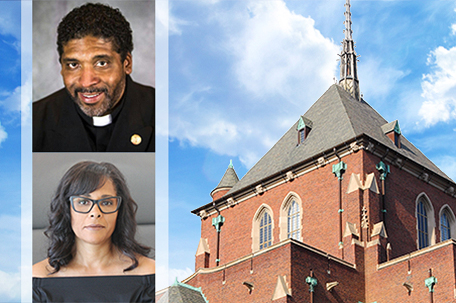 Attendees filled the Irvine Auditorium in University City on January 23 for an interfaith event honoring the Reverend Dr. Martin Luther King, Jr. which featured a conversation with the Reverend Dr. William Barber II and Dr. Camille Z. Charles and was hosted by the Center for Africana Studies at the University of Pennsylvania. The evening also featured musical entertainment and the presentation of the MLK Community Involvement Awards.

In addition to being pastor of the Greenleaf Christian Church in Goldsboro, North Carolina, Barber is the president and senior lecturer of Repairers of the Breach. Barber also served as co-chair of the Poor People’s March: A National Call for Moral Revival in 2018. He spearheaded the “Moral Mondays” voting rights protests in North Carolina and sits on the national board of the NAACP.  Charles is the director of the center, in addition to being the Walter H. and Leonore C. Annenberg Professor in the Social Sciences at the University of Pennsylvania in the departments of Sociology and Africana Studies.

“Community is the essence of what Martin Luther King promoted, and is what our symposium is about,” University of Pennsylvania president Dr. Amy Gutmann told the audience at the beginning of this year’s awards presentation.

The Student Award was presented to Anea Moore, a Penn senior and Rhodes Scholar whose commitment to public service began while she was in high school and has continued throughout her college career. The Staff Award was presented to Jamel Harvey, an enrollment coordinator in medical affairs for the University of Pennsylvania Health System who co-founded Project Reborn USA, a grassroots community organization which provides a support system for the city’s homeless population to help access resources and opportunities. The Dr. Judith Rosen Community Education Award went to Paul Robeson High School for Human Services principal Richard M. Gordon IV, an award-winning educator who in five years helped to transform the school from one which was slated for closing to an institution boasting a 95 percent graduation rate.

There were two Community Award winners this year: the first was presented to Jordan Grabelle, founder of Letters for Literacy (LLL), an organization whose mission is to promote literacy among preschoolers and foster a love of reading by supplying children with handmade packets of alphabet learning cards, and Bracelets for Bosnia, which has donated over 1,200 handmade bracelets to orphans in the Balkans as a gesture of friendship and love. The second award was presented to Anton Moore, 48th Ward Leader and the founder and CEO of Unity in the Community, a non-profit organization based in South Philadelphia which he started in response to the violence and poverty he witnessed there.

Barber began the evening by pointing out that one must remember that to King, preaching was more than soaring oratory; it was a call to action. He said that not only was King’s dream more than a tagline in a historic speech, it was an assignment based upon the Biblical mandate of caring for the poor and those who are oppressed.

He also spoke at length about the long standing tradition of institutional racism in the U.S., and how it has been a part of the nation’s subtext since its founding. He encouraged the attendees to bear this in mind while parsing recent soundbites, incidents, pontifications and reactions.

“Racism is not just being rude,” Barber said. “Racism is about policies.”

Barber delivered an extensive rundown of poverty statistics in Pennsylvania.

“Did you know 40 percent of people in Pennsylvania are poor and low wealth?” he asked the attendees. “I’m talking about 50 years after Dr. King was shot; 49 percent of all the children in Pennsylvania are poor. You’re not going to solve this just with personal charity and handing out food…working at your state’s minimum wage it takes 103 hours of work per week to afford a two bedroom apartment. These are the kinds of hard questions that Martin would ask: ‘And why is this?’. [He] would say that we cannot just glaze over this or just gloss over it.”

Dr. Charles asked Barber to expand upon his focus on morality in the projects he is involved with.

“There really has been no progressive movement in the American project that someplace within it did not have a moral foundation, a moral calling that this was bigger than just partisan politics,” Barber said. “Whether it be the abolition of slavery, women’s suffrage, the New Deal, or when Teddy Roosevelt in 1912 called for health care for all.”

When Charles asked Barber what his advice to young people who want to become more involved in the movement for social justice would be, he pointed out that while some impatience and a sense of urgency is a good thing, lasting change relies upon more than social media posts, soundbites and reactions.

“I don’t want them to dismiss [the fact] that what you are fighting [against] is not new. You’re not the first ones. People have been in the movement for years, and people will be there after you, so changing systems is going to take more than just one tweet, or one march or one rally. There has to be a long term commitment.”

Barber encouraged the audience to remain focused on what the underlying issues are when it comes to the ongoing chaos the country is experiencing and how coalitions must be formed to counteract them. When considered in context of decades of destructive policy decisions over the decades, Trump is not the problem – he is the symptom, he said. People must unite to change the narrative.

“Before Trump, the Supreme Court gutted the Voting Rights Act in 2013,” Barber said. “I’m really bothered when people say ‘this is the era of Trump.’ I say, ‘no, it’s not; it’s your era’…it’s time to stop crying, and it’s time to start waiting every two years before taking action. We need movement.”

For more information about Barber’s work and to become involved with ongoing initiatives and actions, visit: www.poorpeoplescampaign.org.