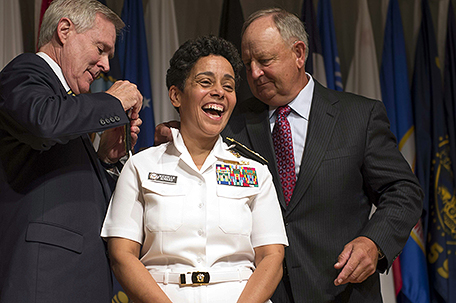 ABOVE PHOTO:  Adm. Michelle Howard, center, smiles as Secretary of the Navy Ray Mabus, left, and Wayne Cowles, Howard’s husband, put four-star shoulder boards on Howard’s service white uniform during her promotion ceremony at the Women in Military Service for America Memorial in Washington Tuesday July 1, 2014. Howard is the first woman to be promoted to the rank of admiral in the history of the Navy and will assume the duties and responsibilities as the 38th Vice Chief of Naval Operations from Adm. Mark Ferguson.  (AP Photo/U.S. Navy, Chief Mass Communication Specialist Peter D. Lawlor)

WASHINGTON — The Navy has its first female four-star admiral.

She is Michelle Janine Howard, promoted on Tuesday to the service’s highest rank. The ceremony was held at the Women in Military Service for America Memorial at the Arlington National Cemetery, near the Pentagon.

Howard has served 32 years in the Navy. She is a 1978 graduate of Gateway High School in Aurora, Colorado. She graduated from the U.S. Naval Academy in 1982.

Among her many distinctions, Howard in 1999 became the first African American woman to command a Navy ship.