Meditation apps proliferate, even if what they provide is not enlightenment 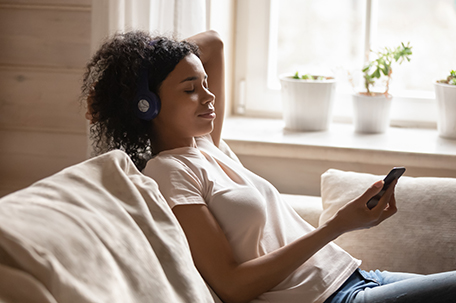 (RNS) — Search your smartphone’s app store for “meditation” and you’ll get more than 1,000 results.

There’s Headspace, which offers beginner courses on how to meditate; Simple Habit, which features short, mostly five-minute guided meditation sessions such as “letting go of work worries” and “mini retreat for moms”; and Calm, which boasts 2 million paid subscribers, 50 million downloads and a company valuation of $1 billion.

In addition to smartphone apps, startups are developing technologies to enhance meditation in other ways. Muse, for instance, is a research-grade EEG headband that monitors brain activity, allowing users to track their progress and tailor guided meditation sessions through sound in order to keep their concentration focused.

But technological tracking shouldn’t be confused with nirvana. “Muse doesn’t deliver you to enlightenment,” Muse co-founder Ariel Garten said by email. “It is simply giving tangible feedback on what’s occurring in your own mind, so that you can learn effectively. Muse enhances your metacognition, your ability to process your own thoughts, and enables you to make choices around that knowledge.”

Mindfulness is now a $4 billion industry, according to the 2019 book, “McMindfulness” by Ronald E. Purser, but commercial success often obscures the complicated relationship the practice has with Buddhism, from which many of these shoppable techniques are derived.

“The Buddhist community is of two minds about what’s going on,” said Carolyn Chen, a professor of Asian American and Asian diaspora studies at the University of California, Berkeley. “There will be people who think it’s a watering-down that’s compromising the tradition — and that it’s not Buddhism. Other people will say ‘No, it’s not Buddhism, but it relieves suffering, and this is what the Buddha taught.’”

While the money that meditation now generates is new, Silicon Valley’s fascination with Buddhism isn’t, said Chen. The tech sector’s roots in Northern California put its founders in close proximity to members of the Beat movement and counterculture of the 1950s and 1960s, when Asian spirituality — and Buddhism in particular — started entering the popular consciousness.

“A lot of people who are part of Silicon Valley and the tech industry were also part of Buddhism becoming more mainstream,” she said. “They moved in the same circles.”

Apple co-founder Steve Jobs traveled to India to study with a guru and had a Buddhist monk come to his office once a week for spiritual counseling. In 2007, Google leadership started Search Inside Yourself, a series of mindfulness courses for employees.

In the process, Chen said, meditation has been stripped of its religious elements and reoriented to achieving nonspiritual goals such as relaxation or concentration at work.

“It’s been transformed into a secular tool for self-optimization,” she said.

The app designers generally respect the religious origins of meditation but have no interest in selling it. Garten makes a point of noting the practice of focused attention’s “beautiful and deep roots in Buddhism” but said Muse was “built as a secular device that is accessible to all.”

“Anecdotally there will be thousands of people who will say, ‘I started practicing mindfulness meditation, I’m not Buddhist, I’m not religious in any way, I don’t go for any of that spiritual stuff. It’s helped me lower my blood pressure, it helps me sleep at night, it gives me peak performance at my job,’” she said.

Ikeda doesn’t use any meditation apps herself but has recorded a guided meditation for the app Liberate, which was created specifically for the Black, indigenous and people of color community.

She worried, however, that removing meditation from Buddhism’s spiritual and moral roots in nonviolence means the practice could be used for unethical purposes.

“When we strip it as a meditation technique out of that huge, very rich foundation of ethics and morality, it becomes a technique that could be used for any goal that we set and that we need more concentration for, even if it’s to, say, exploit factory workers or to do many unethical or violent things with no conscience whatsoever,” Ikeda said.

The Rev. Daigan Gaither, a Soto Zen priest and Dharma teacher in the Bay Area, said that when separated from Buddhism, meditation can also become a tool of the market.

“Capitalism is using meditation to further its focus on increasing production and is using meditation as a way to get people to work harder,” he said. “It’s not just taking meditation out of the context of Buddhist or Hindu practice, which is where it originated, but it’s also taking it in the opposite direction of what it really intended, which is spiritual and ethical growth.”

Gaither, who said he knows few Buddhists who use an app, also pointed out that meditation is not the “be-all and end-all” of Buddhism. While it’s often the centerpiece of Buddhist practice in the U.S., the majority of Buddhists around the world don’t practice meditation.

Another element that’s lost in technology-guided meditation, experts say, is community, or sangha, whether between teacher and student or between practitioners in the meditation hall.  While technology can augment pre-existing relationships, it’s no substitute.

“In Zen, we say that Zen is passed warm heart to warm heart,” said Gaither. “You have to have a relationship with somebody to have that warm heart. That’s not to say there’s not a place for technology in the practice of Buddhism, but I don’t think we can take the human interaction out of it.”

Even as meditation apps, startups and pop-ups continue to generate billions of dollars, Ikeda said she doesn’t anticipate the popularity of these technologies to last forever.

“It’s a trend now,” she said. “And tomorrow it will be something else.”

Six apps that will assist you in healthy living