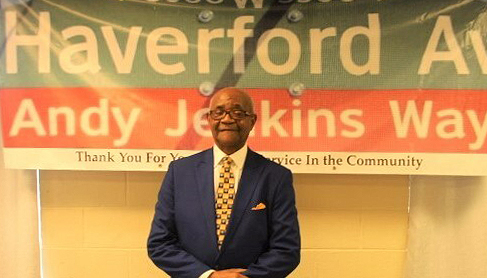 What started out as a celebration on May 14 in West Philadelphia for the Rev. Dr. Andrew “Andy” Jenkins in Mantua, became a historic event for the city.

At 85, Jenkins was the first person who had a street sign and mural dedication on the same day in his Mantua community.

With the encouragement of community members, Councilmember Jamie Gauthier led the effort to pass a resolution in Philadelphia City Council in 2021 to give Jenkins the long overdue acknowledgment.  The mural and street sign naming decisions followed.

Mantua is the birthplace of the Mural Arts Program of Philadelphia, which was founded in 1984. Mantua residents refer to Jenkins as “The Godfather of the Mural Arts Program” since he persuaded former Mayor W. Wilson Goode to hire the late community leader Tim Spencer to lead it. Over 185 neighbors, family and longtime friends came to support Jenkins on his special day of honor both at the street naming site and at the mural site at the Mt. Vernon Manor Apartments, located at 867 N. 33rd Street near Mantua Avenue in West Philadelphia.

“This is a worldwide phenomenon,” said Jane Golden, executive director of the Mural Arts Program. “Cities everywhere are trying to do murals, but you know what? The murals are missing something. What we learned back in the day, right here, is that if you’re doing public art, it has to connect with, resonate, look like and represent the people that live there.”

Damien Bain is the artist who completed the mural.

In the 1960s, 70s, and 80s, Mantua’s leaders had to find ways to protect the community and face the challenges head on.

At the start of the dedication program, one of the speakers, Rev. Paul Hagedorn, led a prayer and reflected upon his friendship with Jenkins back in the 1960s, when gangs ran the neighborhood.  They were “ducking behind steps to avoid the bullets flying over his head during their interactions with the gangs in Mantua.”

Jenkins also shared stories about how he — along with  Hagedorn, other community leaders like Wrice —  tried to stop the gang violence.

“Those 10 bullets [helped] me get to be 85, and lifting weights has kept me great shape,” Jenkins said.

Jenkins started serving his community back in 1965 with the Young Great Society Organization. In 1966, he became the president of the Mantua Community Planners, Inc. organization, which held its first office at 36th & Haverford Avenue where his street sign now stands.

“It’s been a long time coming,” said DeWayne Drummond, president of the Mantua Civic Association. “At such a time as this, this is well deserved for Rev. Dr. Andrew Jenkins. … It’s a legacy. It’s iconic and he is truly a man of God, and I appreciate him.”

“One thing I’ve learned from him is about endurance,” Drummond added. “He said, ‘even though you may get knocked down, you have to get back up and fight the good fight.’”

The SUN spoke with two of Jenkins’ older children, Rick, and Denise, about what the moment was for them.

Jenkins, who has given back to others throughout his life, was humbled by the honor bestowed upon him.

“It is a blessing that I am able to see a lot of people who were part of my past and my future, and for the betterment of the Mantua community and its development, friendship, and family love,” he said.