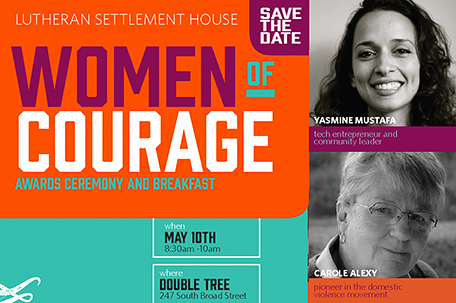 The annual event recognizes spirited and resilient women in Philadelphia

On May 10th, Lutheran Settlement House (LSH) will award Yasmine Mustafa of ROAR for Good with the Women of Courage “Visionary Leadership” Award, and Carole Alexy of Pennsylvania Coalition Against Domestic Violence (PCADV) with the Women of Courage “Community Advocate” Award. LSH will additionally recognize five inspiring clients who have demonstrated courage in the face of adversity and found their way to self-sufficiency.

Yasmine Mustafa is a tech entrepreneur and community leader. Championing the underprivileged has been a core part of her identity since her family was rescued as refugees from the Persian Gulf War. Yasmine is the founder of ROAR for Good, a self-defense wearable technology company aimed at diminishing attacks against women and addressing the underlying causes of violence. She also started the Philadelphia chapter of Girl Develop It, a non-profit focused on providing affordable and accessible programs to women who want to learn software and web development.

Carole Alexy’s career has spanned four decades as an advocate to end violence against women. She was a founding volunteer at “A Women’s Place” in Bucks County in 1976. She now works for PA Coalition Against Domestic Violence (PCADV). In her role, Carole savvily links the world of government funding and regulations with the reality of managing daily life in local programs. Under her care, PCADV has grown to 60 programs serving all 67 PA counties.

General Admission tickets for the Women of Courage Awards Ceremony and Luncheon are priced at $100 per ticket, Nonprofit Admission is $75 per ticket. To buy tickets or learn more about the event, visit: www.lutheransettlement.org/women-of-courage. Engage with Women of Courage on social media by following @LSHphilly and using these hashtags: #WomenofCourage2017 #SupportCourage.

Established in 1902, Lutheran Settlement House was founded on the principles of the settlement house movement and originally served communities of newly arrived immigrants. This year, Lutheran Settlement House will serve over 5400 Philadelphians through four main program areas: Jane Addams Place, a homeless shelter for women and children; the Bilingual Domestic Violence Program; the Adult Education and Career Development Program; and the LSH Senior Center, which includes an Intergenerational farm tended by seniors and local teens.