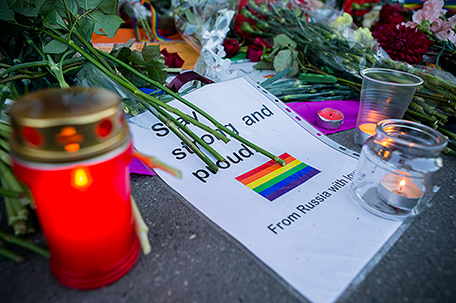 As members of the LGBTQ and Muslim communities in America, we are joined in solidarity, grief and outrage at the horrific attack that unfolded in Orlando on June 12. Our hearts, our thoughts and our prayers are with the victims, their families and the LGBTQ communities, particularly LGBTQ Latino communities.

In this moment of immense sadness and outrage, we stand together united against fear, hate and violence. We will not lose hope in the people and communities around us because we know we are stronger together.

In standing together, hand in hand, across every faith, we send a powerful message to those who seek to divide us using hatred and violence: love is stronger than hate and hope will defeat fear.

We draw our hope and our inspiration by the example set by hundreds of inspiring Floridians who lined up around city blocks in Orlando, answering the call to donate blood.

We draw our hope and our inspiration in the example set by brave first responders who ran into – not away from – harm to help the wounded and prevent further violence.

We draw our hope and our inspiration from the hundreds of interfaith vigils that have sprung up across the world with a clear message: love is stronger than hate.

In the days ahead there will be more calls to define an enemy. There will be cynical efforts to pit groups of Americans – many of whom share a history of being victims of suspicion and discrimination – against one another and to increase surveillance of entire communities, based solely on how they look or how they pray.

We stand united against these efforts to divide us.  We are reminded that as our communities stand together, we are in fact one community – which includes LGBTQ Latinos and LGBTQ Muslims, who are targeted both as Muslims and as members of the LGBTQ community.

Now is the time for people of all faiths, sexual orientations, gender identities, and backgrounds, to come together and refuse to allow this tragic act of violence and hate to divide us.

We are stronger together, and together, we will move forward with love and acceptance for all.

Center for LGBTQ and Gender Studies in Religion

Centerlink: The Community of LGBT Centers