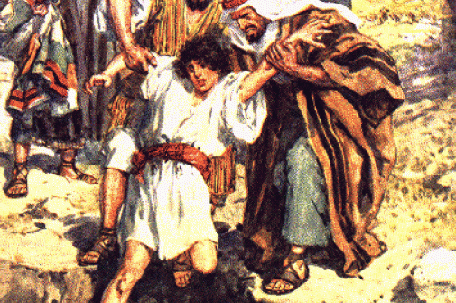 My mother would be the first to tell me that it’s best not to tell everyone about the goals you’re trying to reach. She’s always believed that everyone doesn’t need to know everything you’re up to, and I agree…to a degree. I do believe in a bit of accountability. For example, telling your friends that you’re trying to lose weight may lead one of them to buddy up with you to try and reach that goal. But, unfortunately, others will try to shove a donut in your direction in an attempt to derail your efforts. When accountability works it works well. I’m a part of various groups where people are like-minded. I belong to natural hair groups, fitness groups and writing groups.  These groups inspire me to try harder. But what happens when sharing your dream or goal with someone goes wrong?

Being a “sharer” I always want to boldly say where I’m heading, what I’m trying, or what I’m dreaming about. However, I have learned to take a page from Joseph’s book.

“One night Joseph had a dream, and when he told his brothers about it, they hated him more than ever.” Genesis 37:5 (New Living Translation).

Joseph was a dreamer. In his dreams, he saw himself lifted up over his brothers, father and mother. Needless to say his brothers didn’t like the ideal of bowing down to a brother, let alone a younger brother. Sometimes, sharing a dream can be off putting to others. You may not even realize how others are affected by your aspirations. Does this mean you shouldn’t aspire? No, but it may mean that it’s not for others to know. In the case of Joseph, his brothers were “dream killers.” Later in the chapter his brothers scheme against him. First, they consider killing him, but one of his brothers put a stop to that plan. They do succeed in throwing him in a pit and ultimately sell him into slavery.

You may be excited about your future. You could be going off to college, buying a home, new car, new relationship or marriage. You share the news with someone you think is in your corner. Suddenly they are revealed to be a “dream killer.” “Are you going to college? You don’t need that to be successful! Save your money.” “You’re buying a new house? Why you want to live over there? How can you afford to buy a house on your income?” “Oh she/he isn’t going to be able to keep up on those payments for that car let me know when they reposes it.” “How did she/he meet them? That relationship won’t last!”  These are the words of “dream killers.”  Dream killers won’t always tell you directly how they feel, but will tell others. They silently hope against you. They don’t want to see others succeed for fear they will never have their desires met or they want to be in the spotlight.  The truth is there isn’t just one pie of happiness with only a few slices.  The pie is large enough for all who seek their own spotlight and slice of success and happiness.

Genesis 42:6 says;“Since Joseph was governor of all Egypt and in charge of selling grain to all the people, it was to him that his brothers came. When they arrived, they bowed before him with their faces to the ground.” (New Living Translation)

The journey to this outcome for Joseph wasn’t easy. He suffered many injustices. He was in slavery. He was sold again. He was lied on. He was put in prison. He was forgotten. Then he was remembered and then elevated to second in command over Egypt.

Joseph’s life can be a roadmap for our own. At each stop Joseph became a leader. He was a leader in his enslaver’s hours and a leader in prison. These roles prepared him for the ultimate role he would play in saving millions of lives, as well as, the lives of his brothers…a.k.a. the dream killers. You will encounter dream killers and huge roadblocks as your walk out your journey. One of the more indirect lessons from Joseph’s story is that you never read where he complained. I have no doubt that if it were my story written down (and frankly this is my reaction at times) there would be many chapters devoted to crying out “Why me?!” “It’s not fair!!!”  Fists would shake in the sky totally fighting the process to go from the pit to the palace.

There isn’t anything wrong with dream killers. We have secret weapons against them, closed ears, faith, belief, drive and determination. We don’t have time to converse with dream killers. We cannot allow those bad seeds to take root. These weeds cannot be allowed to grow and strangle our precious blooming desires. Not matter how much you may love or like that person, the conversation isn’t healthy for you. Sadly, there are times when you have to remove yourself from people or just stop talking about what you’re going for so you’re not open for attack. Despite what you hear from others or read in newspaper and magazines, have faith in God’s ability to bring things to pass in their season. Believe in what you’re are doing, stay driven. Keeping our dreams and desire in front of us, whether it’s a vision board or a list, keeps the fire burning. Lastly, we are need determination. To me this is like running up a steep mountain. You have dig your feet in, use the strength of your thighs, claw with your hands, and you will sweat, there may be tears, and the symbolic “blood” will be drawn as your reach your goals.

In the end you simply cannot tell everybody. Let them witness…seeing is believing.