Juneteenth: A welcomed and reflective holiday in America 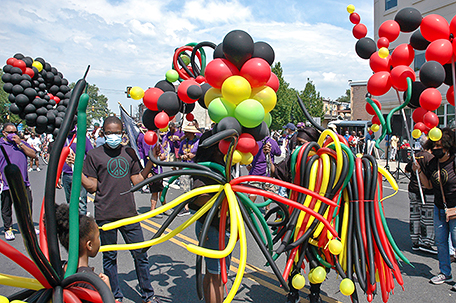 The recent national recognition of Juneteenth has been long awaited and overdue. President Joe Biden signed the holiday into law on June 17, making it the second federal holiday honoring African American contributions and history.

The first was the official birthday recognition of the late Rev. Dr. Martin Luther King, Jr., which was signed into law by former President Ronald Reagan in 1983.

After the 1863 signing of the Emancipation Proclamation by former President Abraham Lincoln, which freed slaves all over including Texas on a gradual basis,Texan slaves did not officially hear about the proclamation until  June 19, 1866. The former slaves named the occasion Juneteenth.

Now every African American who descended from these slaves can honestly tell their children about the struggles and triumphs of their own great leaders who paved the way for a better life for them. All Americans can now learn more about this important history as well.

Last Saturday, West Philadelphia kicked off its annual Juneteenth festivities, beginning with a parade that started at the Spectrum Community Health Center and ended  at Malcolm X Park, located at 52nd & Pine Streets.

As businessman and radio personality Gary Sheppard hosted the celebration, I spoke with Councilmember Jamie Gauthier (D- 3rd Dist.) about what the creation of the new federal  holiday meant to her and her constituents.

“I think I am very glad that the House and Senate passed a bill making Juneteenth a federal holiday,” explained Gauthier. “I think it takes our country one step closer to recognizing this important history and the way that we should. This holiday should be every bit as important to us as “Independence Day”, because this is the day when everyone realized that they were free. I’m really also glad that we have one of the biggest Juneteenth events in the country right here on 52nd Street.”

This day was a long shot for Ron Brown, a Juneteenth advocate and one of the early local co-founders of the fight for the holiday beginning in 1993 in Philadelphia. He talks about what the holiday means through his travels from West Philadelphia to Germantown engaging people about what would become a federal holiday today.

“It’s important that correct history is told,” Brown said., “So, I’m elated over the fact that I got the opportunity when at a time to talk about slavery was not good. You see now that everybody is talking about things that we couldn’t talk about before.”

“Each of them [40 sites] will be open as free to the community and they’ll be able to take their kids to any of these sites that are open throughout the city of Philadelphia,” Brown continued.” All of downtown will be open — the National Constitution, the African American Museum, The American Revolution [Museum], City Hall, Love Park, 52nd Street, The Johnson House and The Hatfield House in Germantown.”

The crowd was appreciative and responded with joyous claps whenever the Juneteenth name was mentioned, as the African drummers who participated in the event reminded them of the importance and significance of the role drumming played for the former slaves living in  1865.

There was a multiracial mix of people attending the celebration, listening to the speakers who shared their thoughts and expressions of Juneteenth with the crowd.

During the event, we were able to talk with a great grandmother Patricia Jones, who bought her 3 1/2 year-old great granddaughter Tahari about sharing this experience with her.

“I am glad it’s a federal holiday,” Jones said. “Praise God. I’m just explaining to my great granddaughter this morning that we are celebrating our ancestors’ freedom enslavement. They did not know for two [ years] and two months that they were free. And so, she asked me every day, ‘what’s your mother’s name?’ and I tell her because she’s keeping the ancestors in my family alive. Thank God.”

Looking through the crowd, I spotted the president of the Friends of Malcolm X Park, Greg Cojulun, Jr.  I asked him about the holiday and what the culmination of the Juneteenth activities will be after marching down 52nd Street to his park.

“I’m glad it’s a federal holiday,” Cojulun said enthusiastically, “It’s about time we got this. We should have had this centuries ago, I mean we worked so hard, struggled, been down trotted for years and years. And it’s fantastic for it to be here in Philly.”

“This is supposed to be the birthplace of freedom,” he added. “With Independence Hall and the Liberty Bell, this is our liberty. This is our day. This is our freedom. It means so much to a lot of people, to our neighborhoods, communities and to the city of Philadelphia. So, we’re happy for all the Juneteenth celebrations. Again, [I’m] just so ecstatic about it coming to Malcolm X Park.”

I asked former Councilmember Jannie Blackwell before she spoke to the crowd about attending one of the very first historical Black colleges — Cheyney University — about why it’s important to celebrate and remember Juneteenth as a federal holiday.

“Well, Juneteenth means that we have a celebration that should have happened a long time ago,” Blackwell said. “But it comes for freedom for Black people. Some people say that this wasn’t our idea and the system finally decided to do it. But we’ll take it.”

“Oh yes, we are so honored,” and I am so honored by the role that Cheyney University has played in [the] history of our country,” she continued. “And the more I learn, the more I realize how far back Cheyney goes and how much a part of it we are. So, we’re here today and we brought some posters explaining what Juneteenth is for young people and we’re going to try and do our part to go around the city today and to celebrate it.”

Remember America, the world continues to watch the slow truth that comes out of your history.

Co-founder of the Pennsylvania chapter of Juneteenth and the African Drummers playing in front of the African Cultural Arts Forum on 52nd Street near Chancellor Street.

Juneteenth, recalling end of slavery, is marked across US