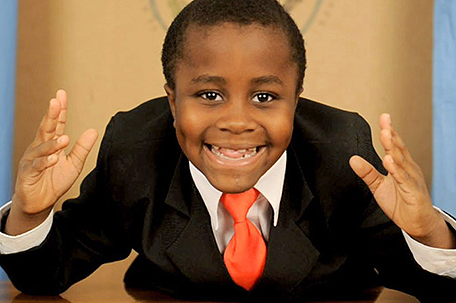 If you’ve seen a video of this cute, cuddly little kid dressed up as the President, then you’ve probably seen the Kid President. Robby Novak, now 12 years old, is an actor best known for portraying the character Kid President online and on television. He has a series of YouTube videos and a television show. His “Kid President” video has been viewed 12 million times online. In it, Robby gives the world a pep talk, but it’s his life off camera that’s the real inspiration.

Robby Novak suffers from osteogenesis imperfecta, a disease that makes his bones brittle. But the nine-year-old doesn’t let his frequent injuries slow him down.

In fact, Robby has had more than 70 broken bones and 13 surgeries. He has steel rods in both legs.

Osteogenesis imperfecta is a lifelong, chronic condition and affects between 25,000 and 50,000 adults and children in the United States. It’s characterized by a lack of normal collagen needed to form strong bones. The result is frequent bone fractures, sometimes for no apparent reason. There are different degrees of OI, ranging from a neonatal type, often fatal, to a very mild type that can be underdiagnosed.

Despite his condition he keeps a great, upbeat attitude. Robby and his sister Lexi, who also has brittle bone disease, were adopted by Lori and David Novak. Laurie and David have been caring for the siblings since Lexi was 17-months-old and Robby was 2-months-old. They also raised three biological children, now grown. They have never held Lexi or Robby back from doing what they love and experiencing life.

“We let our kids be kids,” said Laurie Novak. “Even though it’s scary, we try not to be overprotective. They can’t become well-rounded if they are right next to you all the time. Let them be as independent and as typical kids as possible. We try not to say ‘no.’”

Even when his bones were broken, Robby’s positive attitude and energy were so infectious, his brother-in-law decided to put him on video and the rest is history…