In need of Deliverance (Part One) 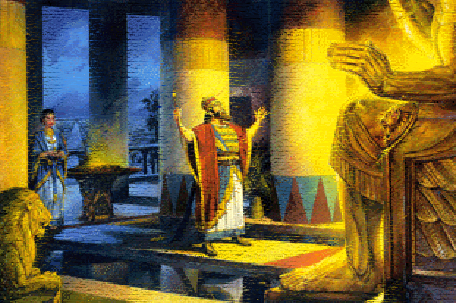 I was thinking about writing on another subject this week.  However, I was driving and I was listening to a person who was talking about deliverance. When he said the word ‘deliverance’, something clicked in my spirit.  I thought to myself, ‘Boy I sure could use some deliverance right now.’ Searching through scripture, the Book of Daniel stood out to me.  Of course, we have all heard the story of the three Hebrew boys.  The three Hebrew boys have been the topic of Sunday school, bible study, and countless sermons.  Nevertheless, this is a story that cannot be told enough.

Nebuchadnezzar was a king who believed and worshipped false idols.

Since he was the king he imposed his gods on all the people in the land.  If you heard the sound that went out as a call in the land you were to fall down and worship this image.  You may liken this to people in your life who have authority.  You may find yourself in a situation where you may be asked to lie at the request of someone in authority.  You may say, “I’ve never been asked to do something like this.” However, many have been asked to do this thing.  But who will not fall down to false images of lying, deceit, and thief? Believe me when I say this I charge us all to be aware of false images, sayings or actions that go against the knowledge of God.

“And whoso falleth not down and worshippeth shall the same hour be cast into the midst of a burning fiery furnace. Therefore at that time, when all the people heard the sound of the cornet, flute, harp, sackbut, psaltery, and all kinds of musick, all the people, the nations, and the languages, fell down and worshipped the golden image that Nebuchadnezzar the king had set up. Wherefore at that time certain Chaldeans came near, and accused the Jews.” Daniel 3:6-8  You know just as I know that if you don’t line up with what someone wants you to do they have a penalty in mind.  The penalty for those who did not worship was to be burnt alive in the fiery furnace.  “Now all the people fell down, all except the Jews.”  Don’t you know that someone will single you out when you stand for God?  When you walk away from gossip, when you refuse to do something that everyone else is doing you will be accused of many things. They can see that you did not bow down. “Oh, she thinks she’s too good to do this or that”.  “Who does he think he is to correct me in right or wrong?!” I’m sure as parents you want your children to think for themselves and NOT go along with the crowd, especially a negative one. Likewise God wants us to do the same.

“They spake and said to the king Nebuchadnezzar, O king, live for ever. Thou, O king, hast made a decree, that every man that shall hear the sound of the cornet, flute, harp, sackbut, psaltery, and dulcimer, and all kinds of musick, shall fall down and worship the golden image: And whoso falleth not down and worshippeth, that he should be cast into the midst of a burning fiery furnace.” Daniel 3:9-11 The Chaldeans were quick to let the king know that the Jews did not bow down to the idol and reminded him of the penalty they were to endure.  Isn’t there always somebody who has something to say about what you’re doing?  I laugh because I know we are all laughing to together thinking about that person right now. That’s another story…

“There are certain Jews whom thou hast set over the affairs of the province of Babylon, Shadrach, Meshach, and Abednego; these men, O king, have not regarded thee: they serve not thy gods, nor worship the golden image which thou hast set up. Then Nebuchadnezzar in his rage and fury commanded to bring Shadrach, Meshach, and Abednego. Then they brought these men before the king. Nebuchadnezzar spake and said unto them, Is it true, O Shadrach, Meshach, and Abednego, do not ye serve my gods, nor worship the golden image which I have set up?” Daniel 3:12-14  Shadrach, Meshach, and Abednego were in leadership positions in Babylon.  The Chaldeans made sure to point these “certain” Jews out to the king.  In life, people will try to make an example out of you. These three Jewish boys would be the perfect example. They would be a great example of the King’s power. An example to let all the Jews know what would happen to them if they did not bow down and do what was required of them.  If the king used them to fulfill his decree than all the Jews would fall down in worship the image.  The scripture goes on to say that: “Nebuchadnezzar in his rage and fury commanded to bring Shadrach, Meshach, and Abednego.”  The Chaldeans had gotten what they wanted which was to have the mind and the heart of the king.  There are those people in your life who will sit in a position to try to call attention to you, not for what good you have done, but for how you stand in “righteousness” and call it evil.  Take heed to what He will do when we are in right standing with Him.

Next week we will finish our look at the wonderful story.  Nevertheless, let me know be remiss in ending with a pray.

“Lord, in this trying time I find it hard to stand. I am in a place where I am surrounded by people who are going against what you word has said.  Yet God I desire to do that which your word says “Stand therefore, having your loins girt about with truth, and having on the breastplate of righteousness” Ephesians 6:14

Today, you need deliverance in your life. You don’t know where to begin. Maybe you feel you cannot be delivered from the problem in your life. You feel like it’s too big or it’s too ugly what you have done. It’s not. Today you can know the Great Deliverer. Today you can invite Him into your life and delivered from all that’s hurting you to a new place in Christ. Say this simple prayer: Lord I want to come home. I am a sinner and I need a savior. I realize that you Jesus are Lord. You died for my sins and rose again on the third day. Come into my heart, Lord Jesus, and set me free from my sin. And, because you are my Savior, Jesus, “I shall not die, but have everlasting life”. Thank you Jesus. Amen.

In need of Deliverance (Part Two)

Dare to Be An Eagle! 2013 Baccalaureate Service (part two)