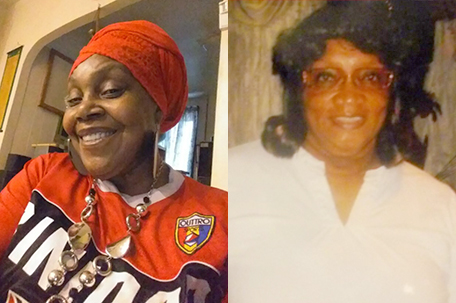 Mother’s Day is a special day that gives honor and respect to mothers in several countries around the world in addition to the United States. It is a great opportunity to show mothers how much we care. In this world, you have only one mother to love and cherish.

There are two women that I personally would like to honor. Both women have a special connection in more ways than one. For starters, both women were born on January 13, 1942. Yes, both women were born on the exact same day and year. One of the women is my mother, Mary Kingcade. She was born in Jacksonville, Florida, but came to West Philadelphia to live with her aunt as a teenager with a suitcase in her hand.

The other woman is my godmother Sister Sarah Abdur-Rahman. She was born in New York, but came to Philadelphia in 1977.

She used to live in a house near 58th and Springfield Avenue,but today, my godmother lives on the 1600 block of South Frazier Street in Southwest Philadelphia.

It’s not everyday that a person like me is lucky enough to have two great women as a special force in my life. What makes this story more incredible is that today both women live less than five blocks from each other. In addition to that, my mother and godmother are enjoying the single life, and  are very independent women. They both have similar personalities. They both love movies and  music. And they both love wearing stylish clothes.

I first met my godmother when I was in high school. During that time I dated her daughter. When my godmother met my mother, they both sat in the living room and shared a peaceful conversation together.

Sister Sarah Abdur-Rahman became my godmother after I broke up with her daughter. Despite the break up, I’m so glad I kept my godmother in my life. She has been a great inspiration in my life. She’s the one who pushed me to be a news reporter. She was also the one who started a neighborhood newspaper called  the Southwest Express. She used her own money to keep the paper running. The paper was delivered door-to-door.

My godmother also became an active leader with the neighborhood kids. She started her own neighborhood youth organization. She called it SWAY, which stood for Southwest Active Youth. She ran dance shows at a local church, and rented space to expand her programs.

While my godmother became a popular figure in Southwest Philadelphia, my own mother was also a popular person.  She made history at Overbrook High School as the first Black majorette captain in the school’s history. She became a majorette captain during her senior year in 1959.

My mother once showed me the 1959 Overbrook High School yearbook. I saw a group shot of the  majorette squad. It was easy to see my mother in the picture surrounded by all those white faces.

Later in life, my mother became a registered nurse and worked at different hospitals during her medical career.

Today, I’m happy to share the life stories of both women. I would like to wish both of them a Happy Mother’s Day. I’m glad to have both mothers in my life — they both deserve this great honor.