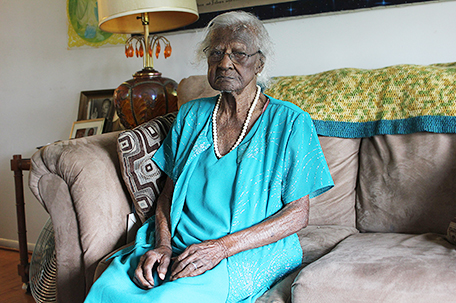 ABOVE PHOTO:  Jeralean Talley, of Inkster, Mich., poses for a photo on Thursday, May 22, 2014. Talley turned 115 on Friday, May 23, 2014, making her the oldest living American and second-oldest person in the world on a list kept by the Gerontology Research Group, which tracks many of the world’s oldest people.  (AP Photo/Detroit Free Press, Elisha Anderson)

INKSTER, Mich. — A Detroit-area woman, a member of a select group of the living to have been born in the 19th century, celebrated a birthday last Friday.

Jeralean Talley, who was born May 23, 1899, went fishing last year and still gets around on her own with the help of a walker.

The Inkster resident plans to celebrate with family and friends at a local church on Sunday.

On her actual birthday — last Friday — Talley went to the doctor for a checkup, although she says she doesn’t feel sick. But Talley’s knees occasionally hurt, her right hand shakes, she has a hard time hearing and her memory comes and goes.

Her answer as to why she has lived so long hasn’t changed over the years.

“It’s all in the good Lord’s hands,” Talley told the Detroit Free Press. “There’s nothing I can do about it.”

Talley is the oldest-living American and the second-oldest person in the world, according to a list maintained by the Gerontology Research Group, which tracks the world’s longest-living people.

Talley, whose husband died in 1988, is cared for by a 76-year-old daughter who lives with her.

Five generations of the family are living in the area, including a great-great-grandson.