Guest Commentary: White churches have a moral responsibility to stand up 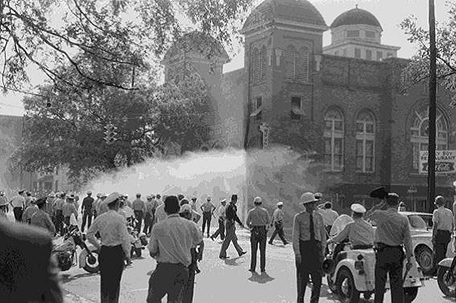 ABOVE PHOTO: Police officers at the 16th Street Baptist Church, headquarters of the Birmingham Campaign in Birmingham, Ala., in 1963. The church was bombed by White supremacists in September of that year, killing four girls.

In 2019, we will commemorate 400 years since the first 20 slaves were transported by ship from Africa by White slave traders and landed in Jamestown, Virginia. Now, four centuries later, race remains a central dividing line. Today, for example, the racial wealth gap exposes a stark difference. The median wealth of a White household (median means half are above and half below) is 12 times greater than that of a Black household. The median wealth of a White household is $134,430, of Blacks it is $11,030. This is virtually all about equity in a home, the leading source of middle-income wealth. African-Americans still suffer from de facto segregation, after years of being red-lined from decent neighborhoods. In the financial collapse, African-American households suffered the worse. Black unemployment rose twice as much as White unemployment in the Great Recession.

Middle-class Black families, lacking inherited wealth, were targeted for the most aggressive and leveraged home loans. When the bust came, they were the most at risk and suffered the greatest loss of homes. The wealth gap is not erased by educational attainment, by full-time employment, by getting the right occupation. The typical Black family with a head of household working full time has less wealth than a White family whose head of household is unemployed. Median wealth for a Black family whose head has a college degree is about 1/8 that of a median White family similarly educated. African-Americans are constantly told to pull themselves up by their bootstraps. In the Black church, for example, ministers repeatedly preach the need for discipline, self-reliance, faith and hard work. Yet even those who succeed still remain behind.

The divide has deep historical roots. Two-hundred forty-six years of chattel slavery (1619-1865), only 12 years of Reconstruction (1865-1877), 19 years of Black Codes, KKK and White Citizen Council violence (1877-1896), 58 years of legal apartheid with nearly 5,000 African-Americans lynched and, even since the 1954 Brown decision, ongoing racial discrimination. During the recent midterm elections, I was constantly asked whether African-Americans would vote in high enough numbers and margins for Democrats so that candidates White and Black had a chance to be elected.

Democrats seem almost satisfied if 20 to 30 percent of Whites turn out to vote for Black or progressive White candidates. What responsibility do White people have to register and turnout for progressive Black and White Democrats running for office? The nation is facing many morally relevant social, economic and political crises — voter suppression, income and wealth inequality, criminal justice reform and climate change — that now pose an existential threat to the next generation. Why does the White church remain so silent in the face of these mounting crises and denial of justice and opportunity?

In Birmingham in 1963, with dogs biting children, high-pressure fire hoses knocking down peaceful protesters, bombers blowing up churches and Dr. King in jail, many White church leaders chose to attack Dr. King’s non-violent methodology rather than to fight for a non-discriminatory Public Accommodations Act. One would have thought when the four little girls were bombed in the 16th Street Baptist Church, White churches would have at least held prayer services or services of reconciliation. Instead, most attacked Dr. King as an outside agitator, as if he had set off the bombs.

Recently in Alabama, I witnessed a stark contrast. One extreme was the excitement in anticipation of the Georgia/Alabama SEC championship football game. When a young African-American athlete, Jalen Hurts, replaced an injured Tua Tagovailoa at quarterback, every Alabamian of every political persuasion, right, left and center, was pulling for him. With Hurts’ remarkable display of skill, Alabama won the game. He not only won the game, he arguably beat George Wallace and the legislators who earlier locked Blacks out of the University of Alabama. He beat Bull Connor who unleashed the dogs on demonstrators and the KKK on Freedom Riders.

He beat the KKK bombers who watched as the church was decimated and four little girls were murdered. The other extreme was witnessed in Hoover, Alabama, where E.J. Bradford was shot in the back by a policeman. That police officer is still on the payroll. The patterns and prejudices of the old South are hard to overcome. Here once more, the White church has the opportunity and the responsibility to stand up, to serve as a Christian witness. White voices of moral authority and inclusive leadership are needed now as much or more than ever. That is why the silence seems so deafening.