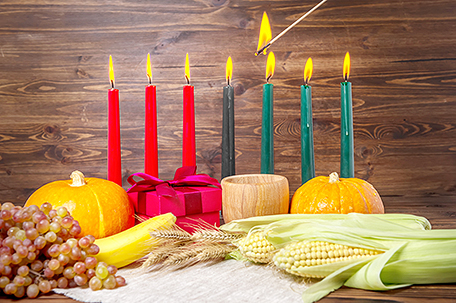 The sickening sight of smug sycophantic Republicans celebrating the passage of their tax bill on the White House lawn was the Scrooge-like move to drop a lump of coal into the stockings of the 13 million Americans likely to lose health insurance coverage thanks to the move.  Of course, corporations are so ecstatic that some – AT&T and Comcast among them – are offering employee bonuses because they will benefit so much from the tax plan.

As disgusted as I am, there is, to quote the Bible, a “balm in Gilead”, or an opportunity to heal the many wounds inflicted by 45 and his callow and kleptomaniacal administration. Yes, kleptomaniacal, stooping so low as to propose regulations that will give restaurants control of employee tips.

Still, there is balm in Gilead, good things, good news that has happened this year despite the utter depravity that has shaped this administration.  My balm comes at the end of the year when we celebrate Kwanzaa, the African principled-holiday invented by Maulana Karenga, the celebration of seven unifying principles for African descendants around the world, a time to be unapologetically Black.  And it is important to be unapologetically Black in a nation that has decided that we can be prosecuted for our very Blackness, broadly defined as “Black identity extremists” because we fail to humbly embrace the possibility of assimilation, because we dare believe that Black Lives Matter.

Kwanzaa – the celebration of the Nguzo Saba (Seven Principles), Umoja (Unity), Kujichagulia (Self-Determination), Ujima (Collective Work and Responsibility), Ujamaa (Cooperative Economics), Nia (Purpose), Kuumba (Creativity), and Imani (Faith), is a time for renewal and repurposing.   It makes the end of the year something to look forward to, and this year all the more so.  Everybody doesn’t celebrate Kwanzaa, but this is a year when balm is especially needed.  We have seen a civil rights hero (Congressman John Lewis) disparaged by a “President” unfit to empty his garbage.  We have seen courageous football players who took a knee for their beliefs being cursed by a “leader” who called them “sons of b–tches” insulting both them and their mothers.   To list every verbal assault (not to mention legislative assaults) that 45 has unleashed against Black people, women, Latinos, disabled people, and others, is to write a series of columns.  It is sufficient to point out that after this barrage of assaults, there is balm in Gilead, healing for the wounds.  For me, that balm is Kwanzaa.

There are also moments and memories that provide some balm.  The activist year began, for me, with the Women’s March.  The young women leader who drew a million or more women to the nation’s capital deserve high praise, and while relations between Black and white women are not smooth, the moment of unity was powerful.  And it was exhilarating to celebrate the moment with new Democratic women Senators like Kamala Harris (CA), and Catherine Cortez Mastio (NV), who have offered pointed and principled leadership during this tumultuous year.

Moments, memories, and victories include the stunning rebuke to Republicans delivered by Democrats in Virginia, New Jersey and most recently Alabama.  They include some local races, and also the anticipatory smiles that come from those who have stepped up to run for office, despite the odds, like Stacey Abrams (Georgia) and Maya Rockeymoore (Maryland).  These candidates are balm because their focused candidacies and furious optimism provides hope for all of us.   Notably, both Rockeymore and Abrams have received the support of the progressive women’s PAC, EMILY’s List, which suggest this organization has come a long way from 1992 when they were very late to the table in former Senator Carol Mosley Braun’s primary race for the Illinois Senate (they supported her earlier and more enthusiastically in the general election race).

As this year comes to an end, I am among those who will lay my weapons down for a few moments, to refresh and renew for the battles ahead, especially around the upcoming 2020 elections.   Kwanzaa is balm in the middle of this madness, an antidote to 45 and his insanity!