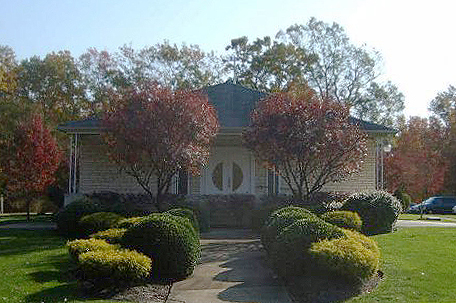 CHESILHURST, CAMDEN COUNTY, NJ — Grant African Methodist Episcopal (AME) Church, located on the “corner of Grace and Mercy” since 1890 in the Borough of Chesilhurst, New Jersey, celebrates the Church 125th Anniversary, from November 20-22, 2015.

The three-day celebration begins on Friday, Nov. 20, at 7 p.m., as Grant AME Church will host a gospel concert at Grant entitled “Raise the Roof.”  The concert will feature several dynamic gospel singers, choirs and other performers. On Saturday, Nov. 21, at 7 p.m., Grant AME will host the Awards Dinner and Dance at Adelphia, in Deptford, New Jersey. Five distinguished leaders and their organizations will receive awards at the banquet for their years of exemplary service to the South Jersey Communities.

The banquet speaker is The Rev. Vernon R. Byrd, Jr., Esq., Pastor of Grant AME Church in Trenton..  A University of Pennsylvania Law alumnus, Rev. Byrd, is the Assistant General Counsel for Johnson & Johnson.  He formerly was the Senior Counsel for The New York Times.  U.S. Sen. Cory Booker has taped a message congratulating Grant AME Church on the church’s 125th anniversary.

Observance of the Church’s 125th Anniversary concludes with Morning Church Services on Sunday, Nov. 22, at 11 a.m., at Grant, 720 Fourth Avenue, in Chesilhurst, New Jersey.  The featured speaker will be Pennsylvania  Rep.  Louise Williams Bishop, an ordained evangelist  whoi also hosted a popular gospel music-based program at WDAS AM/FM for 49 years. Rep. Bishop was inducted into the Broadcast Pioneers of Philadelphia Hall of Fame on November 22, 2013.

Apostle Charles Odom, who recently, retired as Pastor of First Baptist Church, also in Chesilhurst, will be saluted during the Morning Anniversary Service for his years of dedicated service to his church and community.

Grant AME Church’s anniversary theme, “Remembering Yesterday, Celebrating Today and Focusing on the Future,” is inspired by the gospel according to St. Matthew 16:18; “And I say also unto thee, that thou are Peter, and upon this rock I will build my church; and the gates of hell shall not prevail against it.”

“Grant African Methodist Episcopal Church is truly blessed and eternally grateful to God Almighty to be able to inspire people to live a life of faith. Grant AME has helped to spread the Good News of our Lord and Savior Jesus Christ and be a blessing to our devoted members and in our Chesilhurst community and vicinity for 125 years,” said  the Rev. John Clinton Reynolds, Jr., Grant A.M.E’s pastor.  “We are also very pleased to be able to honor at our Awards Banquet five of the finest leaders in the State of New Jersey and their outstanding organizations, institutions and companies.”

THE FIVE HONOREES  ARE:

• ARNOLD NORRIS BYRD, a distinguished son of the City of Camden, NJ, has served with distinction as the Executive Director for the award-winning Camden County Council On Economic Opportunity (OEO), Inc., since 1984. A noted scholar-athlete during the 1950s and 1960s, Mr. Byrd is also hailed as a trailblazer for his outstanding athletic accomplishments at Camden High School, Rutgers University, and in United States military sports.

• LORETTA WINTERS, Executive Director of the Gloucester County, N.J. Branch of The NAACP, has shown outstanding leadership at the local helm of this venerable civil rights organization.

• NEW JERSEY STATE ASSEMBLYWOMAN GABRIELA M. MOSQUERA has served in the New Jersey General Assembly since 2012, where she represents the 4th Legislative District that includes Chesilhurst, Clementon, Gloucester Township, Laurel Springs, Lindenwold, Monroe (Gloucester), Pitman, Washington Township (Gloucester), and Winslow Township. In the Assembly, she is a member of the Commerce and Economic Development Committee, the Financial Institutions and Insurance Committee, and the Women and Children Committee.

In 1887, the Borough of Chesilhurst was founded by Lord Chesilhurst, and today represents one of New Jersey’s few African American Communities.  This is where Grant AME Church was founded and received recognition and its membership into the African Methodist Episcopal Church in 1890, one hundred and twenty five (125) years ago. Grant AME Church is a member of the First Episcopal District of the AME Church, headquartered in Philadelphia.

Rev. John Clinton Reynolds, Jr., Grant AME Church’s current Pastor, has served with distinction in the ministry overall for over 27 years. He is also a retired and decorated paramedic and frontline firefighter for 26 years in the City of Newark Fire Department. With his wife, Rev. Darlene J. Reynolds, who serves as the Executive Minister at Grant, the couple has devoted their lives to strengthening families and encouraging stronger communities. In 2013, the couple was recognized by the New Jersey State NAACP for their years of dedicated service and proactive involvement in the social, economic, educational and political life of their communities.